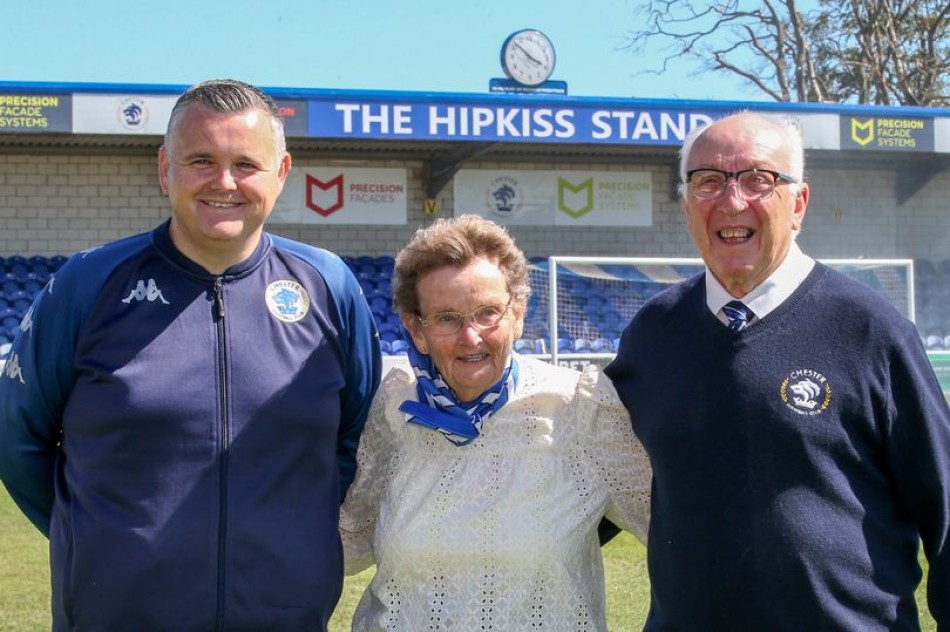 The South Stand has been renamed the Hipkiss Stand to honour the continuing contribution of the lifelong supporters and volunteers.

The manager said: "It is fantastic to see the work they have done for Chester City and Chester FC recognised with naming the South Stand in their name. They are both truly phenomenal people that it has been a privilege to get to know over the years.

"Very few will truly get to know the full extent of the work they do to ensure the club keeps going. So many people have so many stories of Barrie and Pam and the lengths they have gone to for this club over many decades. For the club to have honoured them in this way is tremendous and truly deserved. If I can contribute just 10% of what the Hipkiss family have to our club, then I won't go far wrong."

Barrie started watching the team in 1946 and he and Pam married in 1964 and settled in Handbridge.

They started helping the club by putting up players in their house, starting with Steve Ludlam in 1980 and continuing with a list that includes Robbie Painter, Milton Graham, Colin Woodthorpe and Gary Simpson.

Barrie became chairman of the official supporters club and organised the away travel club.

He continues to organise the club's official supporters' coaches - affectionally known as the Hipkiss Express - with the help of Richard Prince.

He became honorary life president in 2010 and is now the matchday coordinator. That involves organising the turnstiles, match tickets, programmes and number of other duties - and he is also often found helping with numerous tasks at the stadium during the week.

For many years Pam has provided the hospitality for visiting directors, match officials and guests in the boardroom.

The club say: "The Hipkiss family's connection with the football club runs deep with Barrie and Pam's three children all making valuable contributions over the years. Their son, John, served as Assistant Groundsman to Gary Kent, while daughter Julia has helped out as a turnstile operator and her sister Jane, who served as a director of the club, first started volunteering in the office while she was still in school and remains a crucial part of the matchday operation.

"Quite simply, the Hipkiss family embody everything that is special about our football club. In renaming the South Stand, which is visible to every Chester supporter on matchdays, in their honour, the Board of City Fans United extends its heartfelt thanks on behalf of everyone connected with the club to Barrie and Pam for their tremendous and tireless voluntary work over more than half a century."