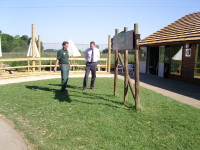 As the country's most visited zoo, Chester Zoo sees more than a million visitors stampede its grassed walkways and public spaces each year, invariably leaving the turf barer than a baboon's backside in busy holiday periods. And with the zoo having just welcomed a new arrival to its menagerie - a five-and-a-half-foot female giraffe as-yet unnamed, born to mum Kelly - even more visitors are expected to flock through its gates this summer.

Thanks to its remarkable deep rooting capabilities, together with its prolific rhizome (underground stem) production compared to other rhizomatous species, such as red fescues, RTF offers outstanding tensile strength and recovery. While red fescue roots reach just 15 to 20cms into soil, RTF roots delve a staggering 1.5metres underground, also equipping it with excellent tolerance to both waterlogging and drought.

Following a successful trial, Mark re-turfed several grassed spaces totalling 1,500sq m across the 110-acre site. "I'm really impressed with the turf's performance," he reveals. "We've re-turfed a 900sq m area outside the Condor Aviary as well as a picnic area that takes a real hammering from children playing on it. The RTF turf looks lush and green, plus we're starting to see it penetrate even deeper the more established it gets."

Mark's also pleased with a small area of grass outside the recently opened Jaguar Coffee House. "This area gets a real pounding because of its small size and we'd normally expect it to be in pretty poor shape by now, but that's looking superb too."

And a simple test to measure the RTF's performance has convinced Mark to order another 1,000sq m of the turf. "I 'patched' a restaurant outdoor seating area, which is compacted because of the seats and tables on it as well as prone to wear and tear," he continues. "It now looks like a chequerboard as the RTF squares standout so much compared to the existing turf."

With the summer holidays now in full swing, Mark is certain the turf will withstand the increased footfall as visitors flock to see the zoo's 7,000 animals. "The turf we've put down is only going to get better with time and we're looking forward to using more. I reckon it could withstand a herd of elephants, never mind our visitors!"

Mark's experience echoes the results of independent trials conducted last year by the Sports Turf Research Institute (STRI), which highlighted the benefits of using RTF in heavy-wear applications. The two trials assessed the wear performance and tensile strength of RTF mixtures in comparison with traditional perennial ryegrass mixtures for heavy-wear applications, with RTF out-performing perennial ryegrass mixtures in both.