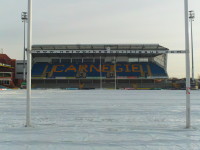 Groundsmen across the country are expected to have their pitches in mint condition throughout year, no matter how severe the weather conditions, to enable professional sportsmen and women to perform at their best to entertain large crowds, and the TV cameras, who pay good money to watch what they expect to be an exciting and skilful spectacle.

There is nothing more calculated to drive a Chief Executive to distraction than to have to forego the cash bonanza of a top Saturday afternoon fixture because the pitch was deemed to be unfit for play. Yet, this happens all too often because those who hold the purse strings refuse to listen to the people that really know about these things - the groundsmen!

The vast majority of all professional soccer and rugby grounds possess some combination of covering which is supposed to offer protection against the "usual suspects" - heavy rain and frost. But for the most part the systems currently in place at far too many clubs don't afford the necessary protection against prolonged and heavy rainfall or frost when it reaches temperatures around minus 3 or 4 degrees.

You would have thought that those responsible would have learned by now but the moneymen seem to ignore completely the advances in the technology in this sector. There is no reason why matches that were called off last season and this because of rainfall or frost could not have taken place if clubs had invested in the pitch protection systems now available. (The recent cancellations from heavy snowfalls causing dangerous conditions for spectators is another debate entirely!)

The economics of investing in a reliable pitch protection system designed to thwart rain and frost are mind-blowingly obvious as the revenue saved from just one fixture alone would pay for an investment that would keep delivering for ten years!

Recently we have had the ludicrous situation at a Premier Rugby Union match when, quite within the rules as they stand, the visiting team refused to play because they, and they alone, deemed the pitch to be unfit for play because there was "water on the pitch" and it was "dangerous". Virtually a full house at Edgeley Park for Sale's game against Wasps were sent home minutes before kick-off. This same team has objected to pitch conditions and called off matches on two other occasions. With the proper rain pitch protection in place this situation would not have arisen. 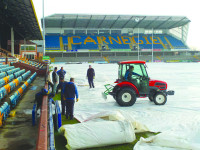 n soccer the referee makes these decisions but in Rugby Union the referee only has jurisdiction when he blows the whistle to start the game. Last season rugby games were postponed because of heavy frost when both teams were in agreement but there were even soccer matches in the FA Cup scheduled for Premier League grounds that were postponed because of frost - with consequent serious loss of revenue and fixture disruption.

To be fair to the FA, they have now sent out a directive to all their member clubs which requires each club to have in place, by next season, their own pitch protection system. It remains to be seen whether the groundsmen at these clubs are allowed to purchase the appropriate systems or are forced into false economies by those who have immediate control of the budgets. General ground sheets cannot guarantee to protect a pitch against days and nights of temperatures that drop below minus three or four.

And matches will be postponed again this Winter unless club executives listen to their groundsmen and take the obvious precautions and invest in their own pitch protection systems which gives them complete control and will enable them to recoup the capital outlay with just one match saved from postponement!

The current "pitch protection arrangements" that are designed to help Premier League Rugby Union Clubs over the next four years, brokered by some club executives and the governing body, are also flawed - not in the systems' performance capabilities but in the fact that there are only three systems available to the 12 clubs that make up Premier Rugby!

The only fixture that took place in the Premier League on the weekend of Jan 8 -11 was the one at Leicester where the system was able to beat the frost ( and snow ). But what happens when these same systems are also on call by the soccer clubs in the F.A. Cup? Who determines where the three systems are deployed? Are the clubs aware of the criteria for selection? 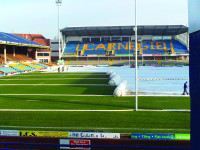 There are now pitch protection systems on the market to protect against both heavy and prolonged rain and frost to temperatures as low as minus 8 degrees.

Adapted from the system used by The Dallas Cowboys and the New York Yankees in the USA, a company based in Yorkshire, JMS Sport, have cleverly refined a way of covering the entire pitch from downpours that is both quick and easy to install and remove as well as requiring the minimum of manpower to do it.

Head groundsman at Headingley, Jason Booth, has been using the system since he saw a demonstration in August 2008 and is delighted with the results.

"If we had not used the Pitch Protector in the few days leading up to the weekend of December 12-14, 2008, our pitch would have taken weeks, if not months to recover. Two inches of rain fell just on the Saturday alone but the Pitch Protector was already in place and coped magnificently", says Booth

Groundsmen also despair when matches are played on sodden surfaces.

"As a groundsman, you want to be able to control the amount of moisture in the pitch - and this will differ pitch by pitch. What you don't want is for games to be taking place on it when the surface is far too wet for it to cope. This will destroy the top layer and make it incredibly difficult to maintain for the rest of the season", comments Jason.

"Like all new systems, it has been a learning curve for us but we can now deploy the covers in 30 minutes once they are in position", says Jason.

"125ft long foam waterbooms are placed under the covers to control the flow of water off the covers and at Headingley 9 covers are used to cover the main pitch with additional smaller covers in the dead ball areas", adds Jason.

This system, although designed primarily to control the water in the pitch, has also helped to protect pitches against frost up to about minus 3 degrees.

Over the Christmas period 2008 Blackpool FC called in Pitch Protector to guarantee their televised match against top-of-the-table Wolverhampton Wanderers. The order was placed at at 1.30 p.m. on Saturday and the "The Pitch Protector" was in place by 6 p.m. It stayed on that night, and all of Sunday and Monday morning.

Blackpool FC Grounds Manager, Stan Raby commented that the game would certainly not have taken place at Bloomfield Road without the Pitch Protector and Wolves manager Mick McCarthy confirmed on Sky TV that the pitch at kick off was in good condition.

By their foresight and good business sense Blackpool FC guaranteed themselves a bumper revenue earning match which grossed an income well into six figures for an outlay of just under £10,000.

To underline the effectiveness of The Pitch Protector, it was not employed by Blackpool FC in the days prior to the game at Bloomfield Road against Birmingham on January 10, and predictably the match had to be called off.

The same company, JMS, has now introduced Geofleece, a protective cover designed specifically to protect pitches against frost of up to minus 8 degrees.

Made in the UK, the fibres that make the fleece are extruded from recycled plastic bottles. The rolls of insulating fleece are deployed before the cold snap and they protect the ground from freezing. The grass remains undamaged when the rolls are removed as the ground and grass are not frozen even though they are only inches below the top surface

This means that advertised, revenue generating matches can go ahead as planned and, if used also on the practice pitch, training will be uninterrupted by the cold snap.

As well as protecting your pitch from frost, Geofleece is a major revenue protector. The loss of revenue incurred by a League One side from having to postpone a Saturday fixture and re-arrange for mid-week is substantial - even more so when the fixture is a major revenue generator.

You don't have to be a top notch accountant to arrive at the right conclusion. Even if we only allow for a drop in attendance of 1,500 spectators ( and with re-arranged fixtures this figure is invariably more like 3,000 in the higher divisions ) the loss in revenue will be, let's say, £15 each through the turnstiles, will be £22,500.

Add to this the loss of income from Corporate Hospitality, Club Shop sales, programme sales, food & Beverage Sales and you are looking at another revenue shortfall of at least £10,000.

Even if we ignore the considerable sum lost from a televised game, we arrive at a figure of £32,500. With this sum you could purchase all you need to protect your pitch and safeguard your fixtures for the next ten years!

Currently all those clubs affiliated to the FA and Premier League Rugby ( and rugby clubs in National League One ) who cannot rely on an expensive undersoil heating system are leaving themselves open to a lottery where the odds are heavily stacked against them?

Even though clubs are always claiming penury, they are willing to spend millions on transfer fees and on player's wages - but are loath to fork out any capital outlay on pitch protection. Yet with only three systems available to accommodate Premier League Rugby and the FA Cup fixtures that take place on the same weekend, the vast majority of clubs are bound to miss out on a bumper revenue earning fixture which would pay for their own decent pitch protection system many times over. And it will be theirs, and theirs alone, to use as they see fit for another 8 - 10 years!

What a way to run a business!