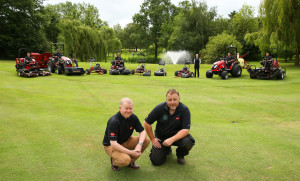 New course manager at Chigwell Golf Club in Essex, Euan MacKenzie, has chosen Toro for all the club's new replacement turf machinery. It follows a brief he was given when he joined the club at the start of this year to review all its equipment and replace with new.

Now the club boasts the latest Toro greensmowers and a new rotary, which have already noticeably improved cutting quality and after-cut appearance.

Euan says: "I started at the club in January and was asked to consider a list of specifications for new machines. So I asked the 'top three' to present their best deals. I have used Toro at several places in my career and have always rated them, but felt it was only right to give a level playing field for all involved. Primarily I was looking for a demonstration of reliability and quality in relation to value, especially in this economic environment!"

Euan's extensive career has taught him what to look for. Before joining the 18-hole Essex course he had clocked up 23 years experience at UK golf clubs such as Stapleford Park Golf Club, even building golf courses in Ireland and Sweden!

"The club has a policy of continuous investment, which ensures the course is always in the finest condition. This investment is part of that policy. In our choice of brand and the specific machines, we also had to consider this is a parkland course with many undulations.

"The Toro TriFlex 3420 and Flex21 were chosen for their credentials in improving greens cutting. The floating, independent cutting heads of both mean they are ideal for our undulating terrain. They give a far more even cut than we had before and a much better after-cut appearance

"The Greensmaster 1600 has a 66cm cutting width and extended cutting height, which makes it the perfect mower for our old-fashioned square tees, which we cut at a height of 10mm twice a week.

"In addition, we got the Groundsmaster 3500 and two TYM tractors. The 3500-D with Sidewinder cutting units is lighter than our previous mower and already giving a pay-off. It is aiding the quality of cut and visual presentation of the course. Both members and visitors are giving us positive feedback on this."

Euan says the new TYM tractors included in the deal with Toro distributor Lely UK are both 35hps, the only difference is one has Galaxy tyres and the other Titan units. They chose the Galaxy tyres for pulling a Toro ProPass top dresser already at the club and spraying, while the Titan-tyred tractor is used for deep tine aerating. The reasons for choosing to do it this way included, says Euan, helping with weight distribution on the greens. As part of this new approach they also got groomers on all machines to improve playing surfaces.

Lely's reputation also swayed the decision to go with Toro. "The beauty of working with Lely is the high degree of flexibility they offer, including the wide range of specifications available. I felt this investment for the club was in safe hands with Lely and Toro," Euan concludes.