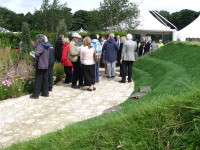 Chris Beardshaw has used Lindum's Grassfelt for his 'best in show' Tatton Park show gardens for the last two consecutive years. Supplied by All Turf, Lindum's North West distributor, this year's consignment of 60 sq metres was used to cover the triple stepped sides of the amphitheatre forming the centre piece of 'Ness Botanische', Chris's design for Visit Chester and Cheshire.

All Turf director Hazel Frith said that the Grassfelt stood up to the wear and tear of the five day RHS event brilliantly. "We had heavy downpours throughout the week and Chris's garden was packed with visitors," she said. "A lot of them climbed the walls of the amphitheatre to get a good overall view of the garden. If Chris had used conventional turf the damage would have been disastrous."

All Turf also supplied Grassfelt for Tim Fowler's 'best in show' back to back garden, "Forgotten But Not Overlooked" and Sheena Seeks' gold medal winning visionary garden "Time And The Bell." Lindum's new Green Roof Mat (a combination of wild flowers and sedums growing on re-cycled felt), again supplied by All Turf, was also in evidence at Tatton, notably on Patricia Lee's 'Fat Birds' feature garden and Reaseheath College's 'Edible Treats' which was the first show garden sponsored by BBC North West and was awarded Silver Gilt.