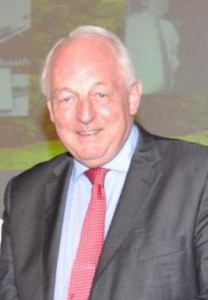 Today marks the retirement of one of the most well known and respected figures in the industry; Chris Biddle.

For close on 30 years he has been the editor of Service Dealer magazine (born out of Lawn & Garden Equipment and Garden Machinery Retailer) providing news, insight and business acumen to an often fragmented industry selling everything from electric garden lawnmowers to high end professional turfcare and agricultural machinery.

I had the pleasure of working alongside him for 10 of those years and it was he that introduced me to this industry. On a personal note, I would like to thank him for mentoring my writing skills and for the opportunity to become part of this vibrant sector.

This is what Chris had to say on the day he retired.

"Today, I step down as Editor of Service Dealer.

I've always wondered what it would be like to pen those words? Strange, yes - but an immensely exhilarating and satisfying moment.

For me, the journey started way back in the 1960's as a young recruit to the Ford Tractor Demo team based at Boreham House. I was allocated a Thames Trader truck to be part of team of four under the command of the unflappable Arthur Battelle. We set off for a six month tour of Spain and Portugal - with me in the passenger seat to Dover as I was too young to drive a lorry in the UK (other side the Channel, just get on with it!)

From Ford Tractors, I spent 25 years working in the family owned farm and grass machinery dealership, A Brewer & Company (known as Brewers of Wilton), learning the industry from all sides. But even from school, I'd always had a hankering to be a journalist and, in my early days, was fortunate to be able to pick the brains of local farmer, author and broadcaster A G Street and the doyen of industry commentators, Jim Priest, editor of Farm Implement Review based in offices in the Strand.

So when a parting of the ways from Brewers came in the mid-1980s, I decided to pursue the dream and start my own magazine (with a handful of O-levels and poor grades in Pitman's shorthand and typing, the DIY approach was the only route).

Nearly 30 years on, there have been thousands of articles, countless editorials, hundreds of photographs, numerous interviews, loads of press conferences and umpteen shows.

Right from the start, my continuing aim has been to listen, understand, analyse and report responsibly on a fascinating industry full of passionate, resourceful, enthusiastic and talented people. There has been a massive evolution in manufacturing, supply and retailing, no more so than in the past 10 years. The economy has boomed and almost bust, yet through it all the controlling factor continues to be the weather. So it is apt that today, mid December it is as warm as it was in mid-June this year!

So first, my personal thanks have to go to you, the readers, for your inspiration, your contributions and your support. Every conversation I had, every visit I made, I learned something new. There was never a dull moment.

Next, two hugely influential people who have been alongside me for long periods. First, Peter Britton. Peter was the studio manager at the local printers in Salisbury in 1988 when I wandered in with an idea and a sheaf of typed notes. He joined the magazine shortly afterwards and set the tone for good design and content over many years.

Steve Gibbs came to me in 2001 with his CV showing a degree in Film Studies and looking for job. He fitted in immediately, and nobody could have wished for a more willing, loyal and conscientious colleague. Steve is taking over the editorial reigns. He is already showing great appetite, ability and gusto for the role.

Lastly, as anyone in a small business knows, the support of the family underpins everything. I've had that 'in spades' from Trish when she was forging her own nursing career and during the latter years as we moved towards our Golden Wedding last September.

So from the whole family, a humble and heartfelt Thank You - and a Happy and Peaceful Christmas and New Year to you all."