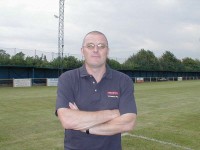 A gentle giant who could head a ball better than Andy Gray. Mind you, he appears to be full of wind!

Who are you? Chris Charles. Part time groundsman at Tividale FC in the Black Country and Grounds Maintenance Operative (25 years) for Sandwell Metropolitan Borough Council.

Status (married, single, children etc.)? Married to Helen for 24 years. Have a 20 year old daughter called Kayleigh and a son called Adam who is 17.

Who's your hero and why? From my early footballing days it has to be Andy Gray who played at Aston Villa. Apart from me he was the best at heading a ball!

What is your dream holiday? A trip to Orlando would be nice but I think that, as I have got older, I would be too scared to go on many of the rides!

What annoys you the most? Bullies and impoliteness.

What would you change about yourself? Many people may have read the message boards on PC (he is Chucky) and so it would have to be less grumpy!! Also to have the calm nature and patience of my stepdad John.

Who wouldn't you like to be? The Prime Minister.

Favourite record, and why? I Wanna Know What Love Is by Foreigner. Simply a class tune.

Who would you choose to spend a romantic evening with? If I don't say my gorgeous wife Helen then I am in big trouble! Mind you, if she couldn't make it I'd take Caroline, the drummer out of the Corrs!

If you won the lottery, what is the first thing you would do? Depends on how much really but, after sorting out the family, I would take great pleasure in donating to worthy causes.

If you were to describe yourself as a musical instrument, what would you be? The lads at work would say a trumpet. Sometimes loud and full of wind!

What's the best advice you have ever been given? "Get out of being a gravedigger as soon as you can".

What's your favourite smell? After freshly cut grass it has to be a good curry.

What three words would you use to describe yourself? A gentle giant!

What talent would you like to have? To be musically gifted.

What makes you angry? People taking credit for something they haven't done.

What law/legislation would you like to see introduced? As previously mentioned, tougher sentencing.