by Neville Johnson
in Schools & Colleges, Synthetics, Cricket, Football, and Rugby
on 01 Jun 2016 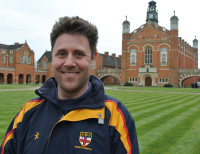 Christ's Hospital School in Horsham, West Sussex describes itself as "a school like no other", and it certainly has a character and ethos all its own. Neville Johnson went there to meet its Grounds Manager, Guy Clough, to see if this extended to the sports fields

Christ's Hospital School, sometimes referred to as the Bluecoat School because of the pupils' distinctive long coat and breeches uniform, started in London and dates back to the mid 16th century, when Edward VI founded it for London orphans. Nowadays, it is a progressive, independent charitable establishment with boarding and day places for 11-18 year olds from all backgrounds. Fees are based on parental income and selection is based more on academic potential. Past sporting alumni include England fast bowler Jon Snow, and currently the most notable Old Blue is Joe Launchbury, lock forward in England's 6-Nations squad and already with twelve caps to his name.

The school's website accurately says: "The campus is nothing short of majestic. From the moment you arrive, you'll see that it is a very special place. Sweeping sports fields, beautiful buildings and our spectacular Quad are immediately visible." How true that is.

Since 1902, it has been set in its own 1200 acres of verdant Sussex countryside, much of it tenanted farmland, with 250 of them under the direct care of thirty-eight year old Guy Clough, who's been in groundcare since he left school.

He came to Christ's Hospital six years ago as Estate Team Leader, heading up the team keeping lawns and all aspects of non-sports surroundings in top order. He made such a mark that, two years ago, the school's Bursar asked him to be acting Grounds Manager, in charge of both the estate and sports pitch teams, for a six-month trial period. The position became a permanent one, Guy having made a real difference to the quality of the playing fields and, in particular, in the way the two grounds care teams operated more efficiently.

The two maintenance teams - a 5-man one for the pitches and 6-man for the estate - operated as separate entities when Guy first came to the school. He could see that this had its limitations.

When he was appointed Grounds Manager overseeing both teams, Bursar Keith Wilder MBE told him he was keen to see a change in the whole operation and Guy has since been instrumental in bringing the teams together.

"Previously, there had been no crossover at all and this, I felt, hampered overall productivity," said Guy. "Everyone has now attended courses on everything from pitch maintenance and marking to tractor driving and hedge cutting, so we can now cover for each other, if necessary.

There is a rota-system so that, every three or four months, everyone moves on to a fresh task. This keeps skills active and everyone on their toes with a much broader interest in what's going on."

"Amalgamation was necessary and has proved very successful. We still have the two team structure, Vince Bowyer leading the Estate team, and Joe Cox, the Sports Pitch team, but there's a constant flexibility."

"At present, I'm the only one with a chainsaw licence, but three team members are about to go on a chainsaw course so, much as I like tree work, the pressure on me to do all necessary felling will ease a bit."

Guy started out as a £55-a-week apprentice greenkeeper at Mannings Heath Golf Club, not too far away, where day release to Brinsbury College at Pulborough helped him achieve Level 2 Greenkeeping and Sportsturf Management. After four years there and spells at two other local courses - the Cottesmore Hotel Golf and Country Club near Crawley and Horsham Council's Rookwood Golf Centre - he progressed to Level 3 and added chainsaw and spraying qualifications to his CV.

He needed a wider challenge than the golf course though and took a job on the grounds team at Cranleigh College, an independent school in Surrey, where, under Grounds Manager Denis Bloomfield, he broadened his skills greatly. After six months there, a bigger challenge at Christ's Hospital came up.

Christ's Hospital has twenty-two natural grass winter pitches for both rugby and football and these are heavily used throughout the Michaelmas and Lent terms. During the summer term, ten cricket squares are in action, together with four 3-bay artificial surface nets. A sand-filled Astro pitch, constructed in the 1990s and refurbished in 2013, caters for hockey, and there are fifteen tarmac tennis and netball courts.

A major project to extend facilities will be underway this summer with the construction of an additional sand-dressed hockey pitch area. This should be in place for the start of the next school year in early September. At the time of visiting the school before the Easter holidays, tenders had yet to be issued. Guy is co-project manager, and he says this will redress something of an imbalance in favour of boys' sport.

There are currently 882 pupils at the co-educational school, almost precisely divided between boys and girls. The new pitch will more than double the area available for hockey, more a winter games choice for girls than boys.

The sub-surface is heavy clay, so drainage and compaction are issues. When Guy took over as Grounds Manager, he made it a priority to tackle this. Previously, surface slitting had been the only course of action, and generally this was inadequate.

Guy now gets in a Wiedenmann Terra Spike from Ernest Doe in spring and autumn to ensure lasting effect with its 18-inch penetration. The Christ's Hospital team operates it and it takes two to three months to get around all of the pitches. Last year, they also used a Charterhouse Verti Quake to help ease decompaction.

"The results have been impressive and it's made a vast difference," says Guy. "When other schools in the area have been cancelling fixtures because of lengthy wet spells, we've had no such problems and been able to go ahead with matches."

The first-15 rugby pitch is what you first see as you drive into the school's entrance. It's very impressive and thickly grassed, even in the closing days of the school's playing season. Guy tells me it's about to be transformed into a 6-lane 300-metre grassed athletics track. Line marking is a major Easter holiday job for Joe Cox's team.

"Because there isn't time to reseed and topdress the area between winter and summer needs, we uses a slow release fertiliser - Premier HG 22:3:15 - each spring to keep the sward thick and healthy and a seaweed feed every autumn," said Guy

He calls on a long-standing relationship with local rep Mike Ring for advice. "I knew Mike from my golf course days. He's always been a great help and will drop by whenever there's a turf matter to put right."

For reseeding work on any of the school's rugby and football pitches, Guy uses a Creeping Ryegrass Tetraploid mix, along with 11:3:3 spring-summer fine turf fertiliser and 5:5:10 autumn-winter feed for the whole of the playing fields area.

In holiday periods, all of the pitches are sprayed with selective weedkiller with added iron in the tank to reduce any turf stress.

Last spring, pitches 1 and 2, used for football, were given a major renovation. Each pitch was scarified, Terra Spiked, topdressed with sixty tonnes of sand, reseeded and fertilised.

"They have played much better since the work according to the football coaches, and certainly look and feel better than they ever have done after a season's heavy play," said Guy.

Perhaps the biggest recent renovation project was the Koroing of the main cricket square. Thatch build-up over the years on the cricket strips was beginning to affect play and bounce. Action had to be taken to put it right. During last year's summer holidays it was, and to very good effect.

Sports team leader Joe had come to Christ's from Horsham Cricket Club, a Sussex CCC outground, and he is the man Guy turns to for upkeep of the cricket squares and outfields. He and Guy went to the county's Hove ground to consult Sussex Head Groundsman (and Pitchcare stalwart) Andy Mackay about their pitch problem and see how he dealt with long term issues, such as thatch, on the county strips.

Andy subsequently came to the school to take cores and look closely at the square's rootzone. His specific recommendation was to call in local contractor Grasstex of Rudgwick and have the whole surface ripped off by Koro.

Guy had never seen Koroing before and was initially taken aback when the machine began its work. "The top 90mm was removed with a ruthless efficiency," he said. "It got rid of the thatch layer once and for all and we were ready to start afresh."

"We did our own multi-direction scarifying to break up the new surface, made the levels good and then seeded and watered using travelling sprinklers. We're really looking forward to the new cricket season, confident that players and coaches will see a huge improvement with better bounce."

Conservation is very important to the school and Estates team leader Vince's role extends beyond the school's own surroundings into the school-owned farmland beyond, where he works with the tenant farmer on wide ranging environmental matters.

Guy tells me that the school is a case study for the Bumblebee Conservation Trust, set up specifically to address the plight of creatures that are vital to nature's conservation. With the help of some ploughing by the farmer, there are now four large wildflower areas within the playing fields aimed at attracting bumblebees. Already, experts from the Trust have identified ten separate species visiting the school's wildflower areas. It gave Guy a chance to do a bit of wildlife photography; one of his off-work interests.

"After ploughing, we rotovated each of the areas using one of our tractors, then spread a wildflower mix with added dried sand, using a spinner to make sure the distribution was even," said Guy. "The result has been very pleasing and is doing a good job for the wild bee population."

Planting a new orchard with ancient Sussex varieties and rejuvenating an overgrown pond area are two other conservation projects undertaken since Guy has been Grounds Manager.

The school really prides itself on its appearance and nothing typifies this more than the extensive lawn area at the heart of the school, called the Quads. There are plenty of top-level functions year round, notably a regular visit from the Lord Mayor of London, signifying the school's historic links with the City. Everywhere has to look good, and always does.

Rotation of staff within the two grounds teams has made a big difference to this famous school's great outdoors.