0 Christmas arrival at The Berkshire GC is genuinely ‘deep, crisp and even’

You can forgive the greenkeeping team at The Berkshire Golf Club for thinking Christmas had come early. On December 23 a Wiedenmann Terra Spike XP 160 deep tine aerator was installed at the Ascot club with enough daylight hours left for it to grace the greens for a few test runs. 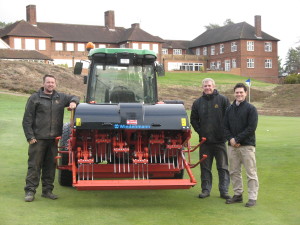 With two highly rated 18 holes courses and located just 20 miles from central London, Course Manager, Ian Morrison said: "It wasn't quite a Secret Santa; we had planned its arrival deliberately to find time to do all 18 greens of the Red course really thoroughly during the holiday!"

Owning two Wiedenmanns already - a Terra Spike XF6 aerator and one of the first Heather Management Systems to go on sale, Ian and his team of 20 were familiar with Wiedenmann's efficient fleet of turf machinery. However, as he inherited both machines when he joined the Ascot club in summer 2010, this was the first opportunity to choose his own.

"Our agronomist confirmed that we had a compaction layer at around 20 cm on all our greens. Last February we trialled the XP 160 on six of the most problematic ones and they responded really well. We tined to about 25 cm and having gone through the clay layer the greens subsequently drained far more rapidly and helped lessen and sort out a few issues with diseases like anthracnose through the season. It was a good result and I'm sure it was relieving that compaction at 20 cm that did it.

"The existing XF6 is really fast and we use it on our fairways to about 18 cm but for our greens I want the facility to be able to go eventually down to 40 cm. I'd used an XP 160 at West Hill GC, my previous course, so I knew the machine well and how it offers that extra depth that our courses demand. Already it's been fantastic and clean and operates very smoothly. The plan is to work it from now until March and then we'll have it back out in October, November and December again, getting around all 36 greens here at least two if not three times a year."

Dave Gray, Area Sales Manager for Surrey at T H White Reading branch said: "The Red and the Blue courses at The Berkshire are two of finest Heathland golf courses you will find in the UK with exceptional course conditions matching the members' expectations. The Wiedenmann XP 160 was chosen to complement his current Wiedenmann XF6 because of the increased working depth making it the perfect aeration partner. The XP 160 enables deep aeration down to 40 cm whilst the XF6 provides the market leading speed on larger areas such as fairways. All areas on both golf courses can now be aerated simultaneously at varying depths and speeds to ensure minimal disruption to the courses as well as the members."