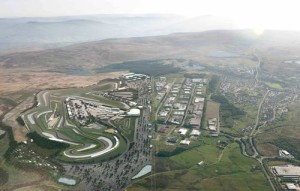 The firm behind the proposed Circuit of Wales project has expressed its "huge disappointment" after the Welsh government rejected requests to fund it partly with taxpayers' money.

A firmly-worded statement by the Heads of Valleys Development Company (HoVDC) said it "strongly disagreed" with the government's view that risks of building the facility "outweighed the benefits".

The developers had asked for £210m (US$269.1m, €236.8m) for the Ebbw Vales-located project to go towards the overall cost of £433m (US$554.9m, €488.3m), but Welsh First Minister Carwyn Jones said the commitment would have taken away capital funding from schools and hospitals.

Billed as a 365-day-a-year venue, the Circuit of Wales was to be home of a new extreme sport and leisure complex and technology park on the doorstep of the Brecon Beacons.

HoVDC remained adamant that the project would have been a "game-changing development", and suggested that work could still go ahead.

"We have always believed passionately, and continue to do so, in this project's ability to transform and provide opportunities and hope to one of the poorest parts of the UK, not just Wales," said the statement. "The project is totally defined, finance in is place, and construction and hiring could start immediately.

"My team and I will now analyse the Welsh government's reasons not to support the development and are actively seeking additional clarification from them. We will then very shortly issue a detailed response before deciding on our next course of action."