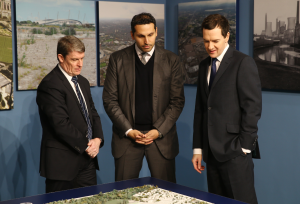 The unveiling of the 80-acre regenerated brownfield site, adjacent to the Etihad Stadium and part of the wider 200 acres known as the Etihad Campus, was overseen by Chairman Khaldoon Al Mubarak and the Right Honourable George Osborne, Chancellor of the Exchequer during his visit to the city.

Prior to the opening event, the Chancellor was given a guided tour of the Academy by Chairman Al Mubarak during which he was introduced to leaders of three local businesses that provided central services and products during the construction of the site. Proceedings also included the unveiling of Etihad Avenue, the central street of the CFA and named after the primary partner of the Etihad Campus, Etihad Airways.

Mr Osborne also watched a lesson of the Manchester City under 12s team, in one of the Academy classrooms, spending time chatting to a number of the students, after which he watched the Manchester City first team train as they prepared for their forthcoming UEFA Champions League match against Roma. 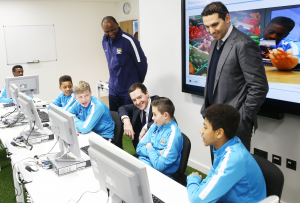 The final part of the tour saw the Chancellor visit the First Team building where he viewed a wide range of facilities, with the tour ending in the circular first team dressing room.

Speaking of his visit, the Chancellor of the Exchequer George Osborne said,

"I am a strong believer in improving sporting facilities for young people, which is why I am delighted to oversee the opening of the City Football Academy today. The partnership between Abu Dhabi United Group and Manchester City Council is a benchmark for public private partnership, driving investment into the North of England and developing projects where business and the community benefit."

"At the outset of his ownership, back in Autumn 2008, His Highness Sheikh Mansour bin Zayed Al Nahyan, set out his vision for the future of Manchester City Football Club. He pledged to bring success on the field and to nurture young talent whilst at the same time remaining proudly rooted to the community in which it resided.

The cornerstone of the future, was a vision for youth development and sustainability; a vision to educate talented young footballers on and off the pitch and to do so in a facility supported by the best coaches and coaching programmes. The vision was underpinned by an unwavering commitment to the regeneration of the local area in both economic and environmental terms. Today marks the end of six years of extensive research, development and construction involving many, many people. It also marks the beginning of a responsibility to deliver against the opportunities that this Academy now creates for us."

"Manchester City Football Club is a valued long term partner and has demonstrated time and time again that it is rooted within this community. The investment into the stadium and surroundings, now known as the Etihad Campus has been unprecedented under the ownership of His Highness Sheikh Mansour bin Zayed.

Now, we are able to celebrate another milestone of this investment - the City Football Academy. It is a project that has turned a derelict 80-acre site into a valuable community asset. I know the journey of transformation for East Manchester will continue with partners like Manchester City and that the community will be healthier and wealthier for it."

The CFA, research and planning for which began at the outset of ownership of the Club by His Highness Sheikh Mansour bin Zayed in 2008, is home to all of Manchester City's football teams of both genders and all age groups. Two thirds of the 16.5 pitches on site are dedicated to the youth talent and the wider development of the young players is supported by tailored coaching and education facilities, medical and sports science services, sleeping accommodation and parents' facilities.

The CFA also accommodates the majority of Manchester based staff in one connected operational base and is a global headquarters for those in the wider City Football family, which now includes sister clubs New York City FC, Melbourne City FC and Yokohama Marinos. The project, which has the overwhelming support of the local community, was underpinned by ambitious local recruitment and supply chain targets both of which were achieved, significantly up-skilling the local community and making a positive economic impact on the surrounding area.

25% of the 70% local workforce was drawn from the East Manchester area with 10% of people on site previously unemployed. A further 95 trainees and apprentices were employed and are working towards professional qualifications. 80% of the project budget was spent in the North West with 883 contracts awarded to local companies.

The City Football Academy also reached the highest possible environmental standards - the gold standard under L.E.E.D. guidelines -with low carbon, low water and low waste measures being employed to minimise impact on the environment and encourage local bio diversity. The remediation alone, of the 80- acre site by the Club had a positive environmental impact, turning a vast tract of land, polluted by years of heavy industrial use into clean terrain. 2000 trees were planted on and around the site.

The Club enjoys a long-standing and mutually supportive relationship with Manchester City Council and the Greater Manchester Community. Consistent with this and in addition to the Club's existing and ongoing City in the Community Scheme which touches 45,000 lives a year with 400,000 individual contacts, the Club donated 5.5 acres of remediated land within the CFA on which the Connell sixth form college was built and a pitch for use by the local community.

The Club also donated £3m million pounds to the creation of public swimming facilities in the local East Manchester Leisure centre and made the bridge, connecting the City Football Academy to the Etihad Stadium, a public right of way for use by its fans and the wider community.