by Laurence Gale MSc
in Public Places, Football, Rugby, and Cricket
on 03 Jun 2013

4 Civil service with a smile at CACSSA

Cheltenham Area Civil Service Sports Association (CACSSA), located in the South-West Region of the CSSC, is a thriving example of what can be achieved when management and members work together to provide the sporting facilities which are so important to individuals' general well-being, whilst more general events within the clubhouse have become increasingly popular.

A new clubhouse replaced the old "shack" in 1994, and was officially opened by the Duchess of Gloucester on 26 April 1995. It has undergone some changes to the original design, and more are in the planning stage, as the association adapts to the varying needs of its members.

The facilities of the clubhouse are hired out during the daytime for conferences, seminars, training sessions and other corporate events. This has developed into a major source of income, which is invested into the club, the association being a not for profit organisation.

Evening and weekend use (limited to events organised by members or affiliated clubs) has also developed, with a variety of functions being held throughout the year from birthday parties, wedding receptions and christenings to quiz nights and skittles.

The ground provides two senior rugby pitches, two senior football pitches, one junior football pitch, an artificial training pitch, four tarmacadem tennis courts and a nine strip square for cricket. The club employs a full time groundsman in Martin Saunders who has been at the club for nine years.

The cricket outfield forms part of all four of the senior winter pitches and, in the summer, the ground is extensively used by the archery section of the club so, in essence, the site is in constant use with little opportunity for major renovations. 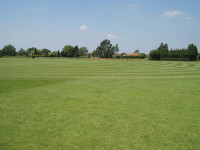 Like a lot of sports grounds, the weather has been its biggest enemy recently. Martin states that he recorded over 1100 mm of rain last year, and heavy rain continued into 2013, followed by snow and freezing temperatures. The constant wet weather resulted in a number of the winter sports fixtures being cancelled due to waterlogged conditions.

The site was formally farming land and originally did drain very well via an old agricultural drainage system. However, in recent years, and since the building of a new housing complex adjacent to the ground, the pitches have not drained so well. Martin believes this may be due to the drainage pipes having been damaged during building works and that, over time, they have silted up resulting in the pitches lying wet and saturated after rain.

This has resulted in Martin struggling to keep them playable and having to resort to applying a few tonnes of sand to restore levels and help surface drainage. 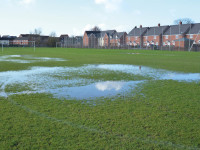 The club's only real option is to install a new drainage system when monies become available. Based on current costs, a new primary and secondary drainage system will cost in the region of £40,000-50,000 per pitch and the club simply do not have the finances to cover that, so are looking into grants and loans to be able to undertake the work.

Martin has a wealth of experience, having previously worked for fifteen years at Cirencester Golf Club, four years at Lillebrook Golf Club and two years at Puckrup Golf Club.

He trained as a mechanic which, he says, has come in handy as he is able to repair and maintain all his machinery on site. He reckons he has saved the club thousands of pounds in repairs and servicing bills alone, and he even sources secondhand machinery, restoring it if necessary to keep the costs down.

One of his latest projects has been the restoration of a five year old John Deere 3225C five gang mower which will save him valuable time cutting the pitches. It now takes Martin two to three days to cut all the sportsfields and half a day to mark out all the pitches.

The football pitches are maintained at a height of 25-40mm, whereas the rugby pitches are cut short in the summer at 25mm and left longer at 60mm in the winter. Clippings are left to fly to return nutrients.

An aeration programme is in place with the aim of slitting fortnightly using a Sisis outfield slitter, along with deep aeration, using a verti-drain, once a year in the autumn.

Fertilising of the winter pitches is carried out in spring, summer and autumn using a range of granular fertiliser products (6-8 bags per pitch). Last year he began with a 6:4:8 slow release, followed by a 12:0:9, and went into the winter with 4:12:12.

The winter pitch renovations centre around a cut and collect, overseeding firstly in March when the ground starts to dry and crack, enabling him to broadcast seed into the soil profile. This is followed by a second overseeding, drilling into the bare areas once the football and rugby seasons finish in April.

As for cricket, the nine pitch square is brought into play as soon as the winter sports season is finished in early April. The square is renovated with the help of Jason Hobbs, the county's pitch advisor, in early September, scarifying the square in several directions, applying 120 bags of Surrey loam and oversowing with a dwarf perennial rye grass seed mixture.

The square is then fenced off, with Martin cutting the square with a rotary mower to keep it tidy. Once the grass has established, and when conditions are right, he will carry out aeration work up until Christmas.

Pre-season rolling commences in late February or early March depending on the weather conditions, using a pedestrian mower before introducing the recently acquired Bomag roller - a bargain at £2,500 off eBay, says Martin. 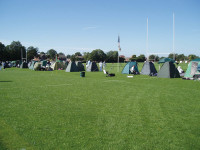 A standard ten to fourteen day cricket wicket preparation programme is followed, reducing the height of cut from 10mm down to 3mm in the process. Martin says that he is fastidious about his prep as, with only nine strips, they have to last as long as possible, sometimes having to accommodate a minimum of six games.

Running alongside a busy cricket fixture list, Martin provides a number of other summer sports in the form of softball, rounders, five-a-side football and archery, in conjunction with many multi sports and cooperate days.

One of the toughest jobs is setting up the archery fields, having to mark in hundreds of lines that have to be accurate to within a few millimetres. 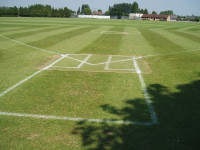 Martin has a constant problem with lost arrows; not only do the archers moan about losing them in the grass, but they often remain undiscovered, causing damage to the mowers.

Martin is kept busy all year round, yet manages to produce a very high standard due to his diligence and care; an amazing feat, especially as he works alone and makes do with a considerably low maintenance budget, currently £14,000 has been set for 2013.

As for a wish list, Martin would like to see the club invest in additional equipment; a verti-drain, blower and a finishing rotary roller mower are his main priorities when it comes to machinery, but top of the list would be the installation of proper drainage to all the pitches.

Cheltenham Civil Service Sports Club remains one of the busiest sporting venues in the town and a lot of that is down to the hardworking staff who run and manage the facility. But, none of it would be possible without their very own dedicated groundsman who, despite all the challenges he faces on a daily basis, thoroughly enjoys producing the varied playing surfaces at the club.