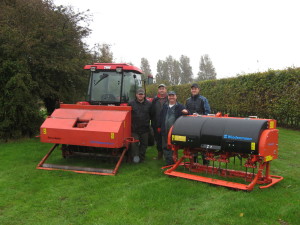 Head Greenkeeper Alan Smith said he had nothing but praise for his outgoing aerator. "It's been a great machine and I reckon it'll go on for at least another ten years but with our schedule of work we were ready to upgrade."

The seaside club earmarked reliability, build quality, productivity and back up service as their key requirements and after several demonstrations their search led them to the XD6.

This brings the total of Wiedenmann aerators they've purchased to three because six years ago they bought a Terra Spike GXi6 specifically for their tees, greens and aprons.

In the five months since taking delivery, Alan Smith reports huge benefits. "It's been out all winter and done a wonderful job particularly on our fairways.

Despite all the rain, drainage about the course is noticeably so much quicker and it means that play can resume rapidly. I think we're now on to our fifth circuit, whereas before, we'd have just got round twice over the winter.

The team at Clacton -on-Sea has followed a very deliberate programme which seems to be paying dividends.

Alan Smith rotates the aerating duties across his team of five and each circuit of the course which includes all the fairways and the semi roughs can be done in about ten days.

Because the aerator is so quick and efficient he takes full advantage of any weather windows and the knock on effect has been that not only can his staff get on with other tasks but his tractor is freed up.

"Where we've really benefited is time. We get over the course so much quicker and as ours is a hugely busy club with lots of members it really makes a big difference," says Alan Smith.

Matt Wise from local Wiedenmann dealer, Ernest Doe & Sons based at Ulting said: "We had the P6's full service history and it had been very well maintained by Alan's team.

The beauty of Wiedenmann Terra Spikes is that they are cleverly engineered to be easy to use and as this instance has proved, pretty much timeless but I can bet Clacton-on Sea won't want to give up their super-efficient ultra- quick XD6 anytime soon."