Michael Clarke has signed off for the final time as Australia's captain with a plea for groundsmen to be granted the freedom to prepare the pitches they see fit, after the conclusion of the equal shortest Ashes series ever 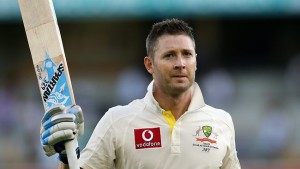 No match reached the fifth day and two barely made it into a third, leaving Clarke to wonder if this was healthy.

Australia have taken pride in the way home pitches are prepared by groundsmen largely independent of national team influence, meaning that each ground has a chance to develop its own consistent characteristics. However the surfaces at Edgbaston and Trent Bridge in particular seemed tailored to the whims of England's captain Alastair Cook and coach Trevor Bayliss, expressed publicly through the media, resulting in short, one-sided contests after the Australians failed to cope with conditions.

Clarke called for groundsmen to be allowed to dictate their own pitches. "I'd like to see groundsmen around the world - not just here - have the courage to go with what they think is a good cricket wicket," he said. "I think we've seen in the first two Test matches a lot of talk from the media and the commentators . . . about how flat the wickets were, yet those two Test matches were over in four days. One team won and one team lost. The next three are over in two and a half and three days."

"I think Test cricket is a five-day battle. I want to see good and fair cricket for both batters and bowlers. I think that's the way the game should be played - and, most importantly, I want to see a winner and a loser. But if the groundsman feels he knows how to produce a good wicket that will be a great battle of Test match cricket then I'd like to see them back themselves and go with that and not be persuaded by what's said in the media or what the commentators say."

Looking back over the series, Clarke argued that better cricket was witnessed at Cardiff and Lord's than in the ensuring three Tests, even if Australia rebounded from their heavy losses at Edgbaston and Trent Bridge to win on a somewhat more equitable surface at the Oval. He also said that numerous English groundsmen had told him they were unhappy to be compelled to do the bidding of others.

"Cardiff and Lord's, we did see some really good cricket. I'm not saying the wickets were fantastic - don't get me wrong - but we've seen a winner and a loser over four days," Clarke said. "I think the past three Test matches have not been that case. People have tickets for today to watch a whole day's play and tomorrow, and the same for Edgbaston and Nottingham. The fans of the game deserve to see a really good contest for five days.

"I don't know what influence the ECB had . . . and to be honest I don't know what influence they [Cricket Australia] have in Australia either. If I go to the groundsman at the Gabba and say 'I want it to be a turned like the SCG' he'll absolutely laugh at me. It might be different around the world. You're given a role, a responsibility, and a job and you want to be able to do your best at that.

"I've got a feeling, from the conversations I've had with a lot of the groundsmen in this country, they're a little bit disappointed they haven't been able to do as they've wanted to do."

Clarke finished his career with 115 Tests, of which 57 were played against either England or India. When asked about this slant in terms of fixtures, Clarke said he wanted to see the game grow as widely as possible, and hoped that administrators would genuinely seek to achieve that in the future.

"I'd love cricket to be played in every country around the world . . . I'd love everybody to have the opportunity to see this great game," he said. "In the same breath I cherish how lucky I've been to be able to play against England as regularly as I have, and play against India and South Africa and Bangladesh, whether it's Test, one-day or Twenty20 cricket.

"Whatever we can do to grow the game, make the game better, touch a lot of different people around the world, that's what I would like to see. I'd like to see cricket played in all countries."

For the original article, visit www.espncricinfo.com.