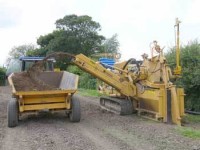 James Pugh-Lewis, director of the Chesterfield based sports field construction company contracted to re build two pitches for Yorkshire's 3rd division Thornensians, 10 miles east of Doncaster, says that they were keen to give the system a positive outlet. "We wanted to take the surface water off site, but due to the sandy subsoil perforated pipes for the main drains were out of the question. We knew that the water table varies and at one point this year it was within 600mms of he surface. According to the water table there are areas of running sand throughout the site and we couldn't risk the possibility of sand blocking perforated pipe," he explains. "Fine particles are enough to block the system, and for this reason all the main drains on this site are sealed. The perforated laterals, are deliberately installed just 500mms down, which is quite shallow, in order to avoid blockage even when the water table is at it's highest. We installed all drains, including the laterals, using laser control."

To add to the general drainage problems the site is very level, and Pugh-Lewis re-graded the surfaces on both pitches giving one of them a crown profile by raising the centre line about 300mms.

"This second pitch was always flooded in wet weather, and un-playable for about two months out of every season" remembers Gordon Gravel, the retired fireman and local magistrate in charge of Thornesians' voluntary grounds care team. "Our first team pitch was better, but it did hold water at times after excessive rainfall. Although it's early days the new drainage appears to be excellent and we've been very impressed."

One advantage of last summer's (04) excessively wet weather was that it not only tested the new drainage but also helped the grow-in of the new grass.

"We got both pitches sown by mid July," recalls James, "and had a full irrigation system on standby. In the event it was so wet we didn't need to use it. By the end of August the grass had been cut four times, and according to Gordon it was growing at the rate of six inches per week. By this time the ground was so wet that we couldn't get the machinery on to cut it."

After some discussion both men agreed a "fit for play" date of 11th Sept. and the Thornesians, who cater for all ages from under 8yrs to under 18yrs as well as fielding three senior teams, have been utilising their new pitches ever since.

For further information on the services of J Pugh-Lewis Ltd. contact the company on Tel: 01773 872362