0 Clean out the coarse for finer turf quality 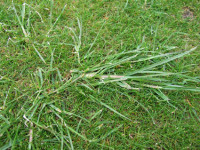 To be launched at St Andrews in Scotland this week (Tuesday 7 July), Rescue is approved for the control of weed Ryegrass on all areas of the course, including greens, green surrounds, tees, fairways and roughs. The product has been extensively trialled by green keepers across the UK over the past two years - successfully controlling Ryegrass and other coarse grass weeds on links, heathland and parkland courses.

Syngenta UK Turf Manager, Simon Elsworth, highlights that Rescue now solves the previously intractable problem of invasive Ryegrass, which can ruin the consistent playability of fine turf greens and the visual appearance of fairways. "Now they have the opportunity to quickly and effectively reduce the damaging effects of clumpy Ryegrass, without recourse to expensive mechanical verticutting, laborious hand weeding or even re-turfing. Rescue is an entirely new class of selective herbicide chemistry for the turf sector, with UK golf course managers the first in the World to be able to use it," he adds.

"The reception and interest we have already received from the golf industry clearly highlights the desperate need for weed Ryegrass control, to improve turf quality on greens and fairways," reports Mr Elsworth. "Further discussion with course managers has highlighted the beneficial potential to create thinner, more manageable roughs, which will make ball location easier and help to speed up play. Research also shows the potential to enhance the environmental value of out of play rough areas, by removing unwanted ryegrass and creating a habitat where wildflowers and biodiversity can thrive.

"Heathland course managers have also identified the opportunity to remove Ryegrass and other coarse grasses, including invasive Purple Moor-grass, from heather areas and bunker faces," he adds. Good results have also been seen in controlling Yorkshire Fog.

Once applied, Rescue is quickly taken up by weed grasses and moves systemically within the plant to reach leaf tips and roots. Targeting a specific plant enzyme, the active ingredient in Rescue, pinoxaden, stops cell division and can achieve a complete weed kill. Ryegrass has a form of the enzyme that is highly susceptible to Rescue, whilst in Poa annua, for example, the enzyme is resistant to the active ingredient.

Fescue grasses have a fine leaf architecture that limits uptake of the active ingredient, which means plants are unaffected at the recommended dose rates. Browntop or Colonial Bentgrass has, occasionally, shown signs of slight discolouration following application, but quickly recovers in good growing conditions.

When applied during periods of active growth, the first visible effects of Rescue are typically seen on Ryegrass within 10 days. Foliar die-back is usually complete within three to four weeks. 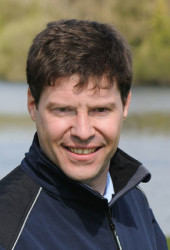 Syngenta UK Turf Technical Manager, Dr Simon Watson, points out the rapid die-back of treated weed Ryegrasses allows unaffected fine turf species to spread and fill the gaps. "In many instances turf managers will also take the opportunity to over sow the treated areas with fine turf species, to speed up the process of rejuvenation and quickly restore the fine turf surface. It also minimises the risk of Ryegrass or other weeds recolinising the gaps," he adds.

"The Rescue Programme has been created drawing on the experience of on-course trials by green keepers and course managers. They have identified the best and most reliable control can be achieved starting the Programme in the autumn, typically in September to October. This targets actively growing weed grasses and gives time for over sown seedlings to establish.

"Programmes can also be started in the spring - from April to June - to minimise summer growth of Ryegrass and weaken plants, making them more susceptible to a follow up autumn application. Spring treatments as a follow up in the Programme can also be extremely effective in maintaining turf free of ryegrass regrowth."

Rescue is approved for up to two applications per season, at a rate of 1 l/ha in the autumn or 1 - 1.33 l/ha in spring. Rescue can be applied by conventional golf course sprayers, pedestrian sprayers or knapsack. There is no need for any restriction or interruption in play on the golf course following application.

"Three to four weeks after application, when the treated leaves have turned brown, turf managers should perform 'The Rescue Rub Test', by gently rubbing the turf surface with the palm of their hand; if the leaves crumble and break up, then the timing is right for over seeding," advises Dr Watson.

He advocates an application of Primo MAXX three to five days prior to over seeding, which has been shown in STRI trials to beneficially suppress competition from the existing sward and allow the new seedlings to establish strongly, with over 200% increase in turf quality six weeks after application, compared to untreated areas.

To help turf managers get the best possible results with the Rescue Programme, Syngenta has produced a range of support tools and information, including a novel Grass Identification Guide - which uniquely focuses on identifying grasses in a tightly mown sward situation typically encountered on the golf course. Other tools include a presentation kit to help explain to the Greens' Committee why treatment is required and a Clubhouse poster to explain to members what they will see after treatment.

Rescue will be distributed in the UK via Scotts Professional