0 Cleanliness may save Bees from disaster 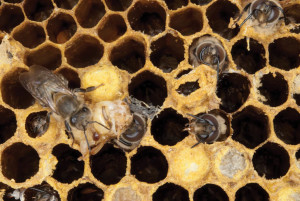 Researchers are suggesting that bee keepers should start breeding their bees to be more hygienic, as this could potentially help protect them from the dangerous parasitic mites that have been kicking struggling honeybee populations while they're down.

Honeybee populations have been in a downward spiral for the greater part of the last decade, with stunning declines from mass deaths first noticed in the United States in 2006. Experts first suspected and then confirmed that the widespread use of pesticides called neonicotinoids (neonics) were essentially "dirtying the fuel" that hives use to sleep through the winter, waking bees early and leading to mass deaths from colony collapse disorder (CCD).

In learning this, the US Fish and Wildlife Service and the National Park Service have begun to phase out the use of neonics. Some big name garden retailers like BJ's Wholesale have also sworn off the use of these harmful pesticides.

Back in October, the Environmental Protection Agency also asserted its own stance against the use of neonics, providing evidence that the use of the pesticides as an insurance policy for seed growth was simply not worth the risk.

However, even as pesticide use is on the decline, new research has found that parasitic mites like Asia's invasive N. ceranae are preventing a swifter recovery of honeybee populations.

These parasites naturally cause CCD by invading hives and infecting bee larvae honeycombes. These parasites then suck the blood of pupae worker bees, reducing their immunity to disease and significantly weakening them.

Thankfully, according to a study recently published in the Journal of Apicultural Research, hygienic worker bees can save the day. They can find "spilt" honeycombs and dump out the contents. As a result, the bee larva inside may die, but so will many mite offspring, preventing further infection of a hive.

Francis Ratnieks, of the University of Sussex in Brighton, and colleagues found in a study of 42 honeybee hives that colonies with more hygienic workers could remove up to 95 percent of all infected pupa within 24 hours. What's more, this tidying behavior also seemed to protect hives 80 percent more effectively against viruses, compared to less cleanly hives, indicating that viral vulnerability has a lot to do with mite infection.

Amazingly, the researchers also found that this tidying behavior is a heritable trait, suggesting that it has a genetic component.

"You can breed for this behavior by screening colonies for hygiene levels and then breeding the most hygienic," Ratnieks said to New Scientist.