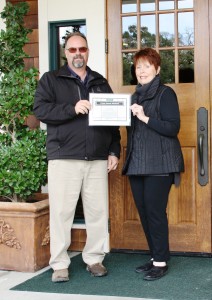 Highspeed Group, buoyed by the success of their ClearWater prize draw at BTME 2017 in the UK, ran the same prize draw at the Golf Industry Show in Orlando USA this year.

MD, David Mears said: "ClearWater is the sole product we focus on at the GIS and the prize draw certainly increased interest in our unique wash station water recycling system. Our aims at the show were to build on the success of our installation at East Lake Golf Club in Atlanta and develop sales of our product in the USA."

The prize of a ClearWater system was won by Todd Schaublin, asst. superintendent at Napa Valley Country Club in California. Todd, told of his win after the draw, informed the club and later was able to confirm acceptance of the prize. Said Todd: "I'm delighted to have won the ClearWater system, and so is the club! We look forward to installing and using this efficient water-saving wash system."

With water conservation high on the agenda and concerns about pollution prevention, Highspeed Group sees potential across the US for their ClearWater system and hopes to be working with a distributor soon.

Installed below ground, unlike most other systems, unobtrusive ClearWater offers a system that is uncomplicated to operate and maintain. The efficient system, firmly established in the UK, represents exceptional value for money too, particularly as it is available for self-installation, enabling costs to be reduced.