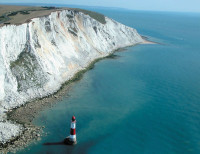 Many people wouldn't associate the word cliffhanger with the sport of bowls, exciting as it often is. But, in the case of St John's (Meads) Bowling Club, the term is more appropriate than they would perhaps like. TOM JAMES reports on the club that is literally 'on the edge'.

St John's (Meads) Bowling Club is a little different from most of its counterparts. Yes, the surface of its single green is immaculately manicured; yes, most of its members are enjoying retirement; and yes, it too struggles to attract young blood into the ranks.

However, few, if any clubs, are positioned as precariously as St John's. The sound of the sea presents a perpetual backdrop to play but you cannot take a stroll along any nearby promenade, because St John's is perched near the top of one of England's highest cliffs - Beachy Head in East Sussex.

Rising to prominence in a recent showing of BBC2's Coast series focusing on south-coastal erosion, St John's is also the only council-owned bowls facility in the region.

Eastbourne Borough Council has lovingly nurtured the sole square of green for more than 70 years, proof of a long-standing commitment to bowls that permeates every club sited within its boundaries.

Although the programme highlighted the rate of cliff erosion on this most renowned - not to say notorious - stretch of Britain's coastline, both club and council remain resolute that the waves shall not pass - at least not sometime soon.

"We are in no immediate danger," declares Tony Holland, past captain of St John's who also handles media and publicity for the club, despite the fact that further up the cliff some years ago, the lighthouse had to be moved, stone by stone, inland to prevent it from crashing into the English Channel - and that it may have to be moved again as the precipitous edge moves inexorably closer.

"It does get pretty windy up here," Tony adds rather matter-of-factly, "and we have to contend with the salt air, but actually the green is mostly sheltered from the worst of the weather by high hedging on the seaward side. The south-east corner of the green is windswept but that's about it."

Perhaps the surprisingly benign playing conditions explain why St John's numbers some 35 ladies among its 80-strong (and growing) membership. "This was traditionally a man's sport until about 20 years ago," recounts Tony. "Fortunately, attitudes change," although, he contends, "men do just have the edge still, despite ladies' improving standards of play. They do not compete against each other directly, although we do run mixed pairs here. There's a unisex indoors facility in Eastbourne, however, where the men and the ladies do square up against each other in the singles."

As there are no leagues in Eastbourne currently, all St John's matches are friendlies although the club enters the local town competition along with the seven or so other bowls clubs.

With an average age of its members of around 60, the club is surely desperate to bring in younger players - otherwise its days are well and truly numbered, irrespective of the threat from the sea.

"Some clubs are trying very hard to attract younger members," says Tony, "but it's difficult to keep them. It is happening to some degree. Bowls can be a young sport."

"Often, members' daughters, sons and grandchildren join when they are 14 or 15 but, as they get older, they drift away - they can think of other forms of entertainment," he adds wistfully.

Even more pressing than the threat of erosion or the drive for new members is some urgent remedial work to the green. He holds no fears over the quality standard of the undertaking, however. "The council does a grand job," he states. 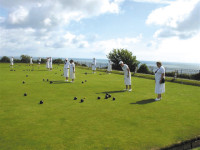 Work is about to start on raising the edges of the green, which had slipped through prolonged wear and tear over the years. "The problem has come about by players stepping down from the edge of the green. The centre of the green is now three inches higher than the edges, so bowls just keep on going into the ditch - it's very frustrating." They are not alone though. Many greens suffer similar problems, he says.

The turf will be stripped back about two and half feet, the edges packed and gradually levelled off, then the turf rolled back, with new pre-formed concrete ditch sections laid in the perimeter channels.

"The work will make a huge difference to play," predicts Tony. Although the club is shielded from the financial hit of grounds maintenance, Tony knows only too well the price private clubs must pay to keep their greens pristine.

The town's greens tally is about 15, mostly leased from the council, but one club has been forced to return two of its four because it simply cannot afford the upkeep.

Annual maintenance costs for one green can be £8,000, or around £12,000 for two, he says. "It's a lot of money to find."
But, back at St John's, Tony is wrestling with another problem - moss. "It's particularly bad this year - the worst I've ever seen in fact. About 15% of the area of the green is affected. The dampness and lack of sun doesn't help.

"Cumberland turf was laid originally but, over the years, a 'mongrel' has evolved. Our biggest problem is wear and tear of the areas where members bowl from. The green is divided into six lanes and to limit wear, we have to move these over each day using a colour-coded system."

St John's does not rest in splendid isolation atop the cliff but, in fact, forms part of a larger council facility called Helen Park Gardens, which features pitch and putt, petanque (boules) and play areas, all maintained by Eastbourne BC, which appointed Wyevale Grounds Maintenance on 1 January on a 10-year contract to maintain its sportsgrounds and amenity areas.

With 15 years service under his belt, Eastbourne's parks and gardens manager, Gareth Williams, is no stranger to conditions prevailing on the cliff-top facility or to the quality of the bowls surfaces locally.

"We have some high-class greens in the town," he states proudly, before turning his attention to the coastal erosion issue. "After the cliff fall some years ago, we erected galvanised railings to protect walkers. We also monitor the paths at least monthly for signs of any movement."

Climate change means that maintenance to the St John's green is a year-round undertaking, he explains. "We start lifting the edges of the green and renewing the guttering this week (1 February). The work has to be completed by 31 March, our year-end."

"The pre-season preparations will soon be in full swing - brushing and drag-matting precedes mowing, "which we'll be starting by March: a height of between10 and 16mm is our specification to the maintenance contractors." Gareth speaks to St John's regularly on maintenance matters - he'll be addressing the issue of the moss shortly, no doubt - but he takes the opportunity to lay out Eastbourne's commitment to green policy.

"We'll be applying fungicides and lawn sand to control the moss but good management of the green should inhibit growth anyway. That's why meeting the club regularly is so important - so that we can nip problems in the bud. As a council we use the greenest methods possible and use as few chemicals as we can."

The use of chemicals is much in the mind of the industry currently, after the EU delayed an outright ban on their application to sportsgrounds and amenity areas. Wyevale are free to sub-contract spraying to a specialist contractor, Gareth points out, who adds that it is up to the contractors how they deliver the council's outputs.

Moving to later in the year, scarification of the green is undertaken in the autumn, "but is not always 100% effective. We use a rotor-rake, scarifying in four directions to remove thatch and encourage turf growth. Hollow tining to 100mm follows, with solid tining conducted every other year to relieve compaction."
However, the chalky substrate on which the green is laid gives almost instant drainage, adds Tony. "We can starting playing literally 15 minutes after a thunderstorm - the drainage is so rapid."

Gareth continues: "Slit tining to 75mm in two passes is completed as and when required, then we'll lay two tonnes of topdressing." Given the commitment to the green's upkeep from club, council and contractor, the quality of playing surface is in safe hands.

Nearby though is the ever-present reminder of the fate that might befall the facility - one that they have no power to control. "There used to be a picturesque house just to one side of the park," says Tony, "but half of it fell into the sea about 15 or 20 years ago. It's just an enclosed area now - a sort of secret garden where no-one goes."

No doubt, the area commands an atmosphere all its own - remote, yes, forlorn, yes, but, at the same time, St John's (Meads) Bowls Club imbues it with a special community spirit that belies the more sinister reputation of Beachy Head.

Who knows, perhaps a game of bowls might prove just the remedy for despairing souls contemplating the final suicidal leap from the cliff top?
Tony laughs, then quickly falls into reflective mood - "Beachy Head is a macabre place," he notes sombrely. "There's a phone box near the summit with a number for the Samaritans inside."

St John's is, nevertheless, perfectly positioned to perform what would be a lifesaving service in a period when the constant threat to its own mortality is always so clearly evident.