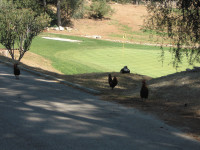 With most climate change experts predicting that the south of England will have a Mediterranean climate by 2050, what are the issues facing those regions now?

Coupled with a huge golf course building programme, will there be enough water to keep Spanish courses alive?
Agua Issues

Golf in Spain has been growing throughout the 20th century, but there was a particularly rapid increase during the 1990s. Since 1997 the number of golf courses in the country has increased by 83%, to around 300. During the same period the number of golfers has grown even more rapidly; up 128 % to almost 300,000 registered players. This increasing popularity means that there will be more and more demand for new courses.

Because of the importance of golf for the tourism sector, many of the courses are concentrated along the country's Mediterranean coast, with the Costa Del Sol being the most popular. But the mildness of the Mediterranean climate means that a huge amount of water is required to maintain high quality turf. The two climate drivers of irrigation, rainfall and evapotranspiration, are very different from most other European countries.

In most regions of Spain, rainfall is concentrated in winter, while the summers are extremely dry and hot. Evapotranspiration rates are some of the highest in Europe, with average values in some of the driest areas of more than 7mm/day in July and August. For that reason the entire golf course is irrigated, unlike here in the United Kingdom where, generally, only the greens and tees are irrigated. On a typical golf course in Spain the total irrigated surface area is around 34 hectares, whilst in the UK it is around 2 hectares.

Due to the large surface area, and the extreme climate conditions, the average water consumption per year on a typical 18 hole golf course is around 350,000 cubic metres, with an average applied depth close to 100mm. Consumption can be even higher in some areas of Southeast Spain. Based on average values, the total consumption in the country has been estimated at already more than 85 million cubic metres every year.
CLIMATE CHANGE IMPACTS

In future years, the number of golf courses is expected to rise spectacularly. Some predictions suggest that the number will double in just five years, with a bigger increment in the Southeast, where the water deficits between available resources and demand are already dramatic. That increase would result in a significant growth in water consumption.

But another threat that could also make the water demand grow is climate change. Under the present predictions, evapotranspiration will rise in all regions of the country when the water demand is highest. Rainfall will be affected too. Whilst only a slight reduction in the total amount is forecast, importantly, its distribution over the year will be concentrated into the winter months while summers will become even drier and hotter. Also, the probability of extreme events such as droughts or heavy rain, will increase.

To illustrate the impacts of climate change on water demand, we can use an agroclimatic indicator called PSMD (Potential Soil Moisture Deficit). Basically, PSMD is a cumulative balance of rainfall and evapotranspiration.

There is a strong correlation between the yearly peaks in PSMD and water consumption; thus changes in peak PSMD can be used as an indicator of the growth in water demand. In Figure 1 the average values across Spain are compared, using records for the baseline (1960 to 1990 average), and modelled predictions for the 2050s and the 2080s.

For these predictions, the climate change model HadCM3, developed by the United Kingdom Meteorological Office, was used. Estimations are for two scenarios, B2 and A2 (medium and high level of greenhouse gas emissions respectively).

The comparison suggests that by 2050, parts of northeast Spain will have irrigation demands similar to those currently experienced in the southeast, whilst southeast Spain will be hotter and drier than anywhere in Spain at present.

To check the changes in PSMD at one specific point, a long term climate dataset from Malaga has been used. Malaga is located in the south, on the Mediterranean littoral and it is the province with the biggest concentration of courses in Spain. In Figure 2 the recorded values since 1983 are compared with the predicted average values for the 2050s and 2080s under the two scenario, all ranked by size.

For the 2050s, the average PSMD values will be very similar to the driest years in the last twenty. Those were in 1995 and 2005, when the country suffered major drought. For the 2080s the predictions are even worse, with PSMD values much higher than the extreme values registered in the past.
Converting this increase of PSMD to irrigation need, the predictions would imply an increase in turf water requirements of more than 20% by the 2050s and approximately 60% by the 2080s.

Furthermore, these increases will occur at a time when we will have additional problems due to the reduction in available summer water resources, because of the new distribution of rainfall.

Clearly there are likely to be major water resource problems ahead for golf in Spain.
ADAPTATION OPTIONS

To mitigate climate change impacts, adaptation options will be needed. To cope with the water scarcity golf courses will have two options: obtain more water for irrigation and improve the efficiency in the use of the water.

In Spain, water resources are already under huge pressure. Many other sectors are demanding more water for their own needs, and there is growing pressure to actually reduce water abstraction to protect the environment. To obtain more resources for golf will not be easy. Under Spanish water law, transfers from agriculture to golf are not allowed. Given the high income and employment generation of golf courses, it could be argued that government should change the water law to allow that sort of transfer.

This would enable the development of a water market, designed to allocate the water to the most profitable sectors. However, there are strong vested interests that might oppose that change.

Otherwise non-conventional water sources such as recycled waste water and desalinization seem to be the only alternatives for golf. As most of the courses are located on the coast, desalinisation would seem to be a good option to increase water availability, particularly if new technologies currently being investigated result in less expensive production.

Even so, the high energy consumption required conflicts with efforts to limit climate change.

Recycled waste water is certainly a possibility, particularly remembering that many tourist golf courses are associated with the development of accommodation, shops, hotels, etc; the waste water from those developments may well be enough to supply the golf course after treatment. This also helps minimise the problem of waste water disposal. Health and Safety issues, and customer perceptions, do need to be addressed very carefully though.

The other alternative will be the improvement of the efficiency. There are many options, such as investment in better irrigation equipments and better scheduling. That would allow greenkeepers to apply the exact amount of water just when it is needed.

But probably the best option for the golf sector in Spain will be the development of a Spanish kind of golf course, based on the Mediterranean forest landscape with indigenous turf and tree varieties that are more tolerant to water scarcity and extreme temperatures. That would reduce the water consumption hugely, especially if we compare it to the present situation, where most golf courses are currently being designed according to the USGA model with high water requirements.

In a typical Spanish golf course only 10% of the total irrigated area is for tees and greens. Restriction of irrigation to only tees and greens during droughts, with deficit irrigation strategies in the rough and on fairways, would reduce water consumption greatly.

A mixture of all these alternatives will be needed to achieve the sector sustainability in the 21st century, with very limited resources and many sectors demanding the water.