by Charlotte Eglington
in Cricket
on 29 Jul 2013 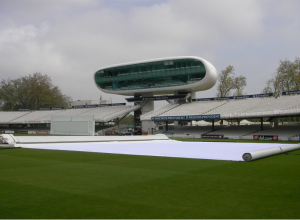 The number of first class cricket grounds using the Climate Cover System™ has been on the rise recently; following a flurry of orders over the past twelve months.

The covers are now in use at no less than ten county level grounds across the country - including the three that played host to this year's ICC Champion's Trophy - Cardiff's SWALEC Stadium, home to Glamorgan CCC; Surrey CCC's London base The Oval; and Birmingham's Edgbaston Stadium, from which Warwickshire CCC play.

Developed by the team at cricket playing surface specialist total-play Ltd, the Climate Cover System™ is manufactured from a unique material, and is designed to keep rain off with great efficiency whilst allowing vapour to escape and the plant to breathe, thus offering long-term pitch protection without compromising plant health or surface quality.

100% waterproof it is the strongest, lightest, only breathable flat sheet surface cover and is also used at the ECB National Academy, Lord's cricket ground, test match grounds, schools and local league clubs across the country.

Gary Barwell, Head Groundsman at Warwickshire CCC, says: "The Climate Cover System™ offers everything you want in a ground cover - it is ultra-reliable, lightweight and easy to use but, most of all, it performs.

The system is in constant use at Edgbaston and was used all the way through the 2013 ICC Championship Trophy series."

Image: The Climate Cover System™ in use at Lord's cricket ground - it is also used by the three grounds that played host to this year's ICC Champion's Trophy

All Climate Cover products are available online exclusively via total-play's online store, www.thecricketgroundshop.co.uk. Alternatively, for further information on the Climate Cover System™, visit www.climatecover.co.uk or call 01604 864575 to discuss your needs.