0 Clive Pring has no concerns over St James's Park pitch 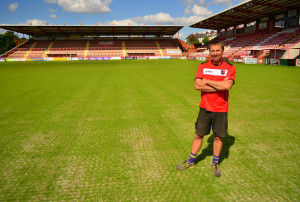 Exeter City Estates Manager Clive Pring has no concerns about the St James's Park pitch ahead of the club's FA Cup match against Liverpool on Friday night.

Devon was subjected to a deluge of rain last week, with a number of sporting events called off, although City's home match against Dagenham & Redbridge still went ahead.

Clive is confident that, even if the weather takes a turn for the worse again before the game, there is no chance of the match being called off.

He said: "I've no concerns over the game at all; Friday looks like a lovely day and even if we had an amount of rain on Thursday, our pitch drains well enough that you only need a few hours and it's back to normal.

"The forecast looks really good and if it was going to turn bad then there are some other options available to us to make sure the game goes ahead in terms of the companies that the TV companies use.

"As a football club, we don't want to have any issues with the game not going ahead, but, at this time of year, people are more likely to be worried about frosty weather but we're not going to be getting any of that at the moment.

"The pitch took a bit of a battering last week but we were quite pleased to get the Dagenham game on.

"At the moment it's looking in good stead, ready for Friday, and we've got some better weather on the way, which will enable us to do a bit more to it."

Read the full article from the Exeter Express & Echo HERE