1 Clontarf - the home of Irish cricket

First impressions count for a lot. There is nothing better than to see a well presented sports venue that looks smart, sharp and tidy. One such venue I visited this summer was Clontarf Cricket Club. I was there to meet Head Groundsman Karl McDermott who had been nominated for this year's Groundsman of the Year awards promoted jointly by Cricket World and Pitchcare.

I was met at Dublin Airport by Karl and taken the short distance to Clontarf's ground, just four miles north east of Dublin. The ground is located on Castle Avenue, 100 metres from the significant local landmark of Clontarf Castle.

Clontarf Cricket Club was formed in 1876, one year before the first ever England v Australia Test match. At the time it was a junior club and had only one team. The original ground was at a site about one mile away from the present ground.

In 1896 the club moved to its present location. Two years later the club gained its first trophy when it won the Junior Cup. After further junior success in 1905, the club was, in 1908, promoted to senior status and the present pavilion was built. The club has remained a senior club ever since and now fields five teams in various leagues of the Leinster Cricket Union's competitions ranging from Senior A to Junior C and two Ladies sides. There is also a vibrant youth section comprising eight schoolboy teams, competing at ages from Under 11 to Under 19, and two schoolgirl teams at Under 13 and Under 15.

In 1947 the ground at Castle Avenue was purchased from the Vernon Estate in the joint ownership of both the Clontarf Rugby and Clontarf Cricket clubs. The site had a 99-year lease, with an option to purchase. At the time, it was used as allotments. 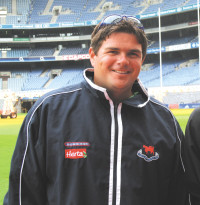 It was gradually converted to use as a cricket ground between 1954 and 1958. 1964 saw the first International First-Class match played in Clontarf when Ireland played against The MCC. It is now the country's most highly rated ground and is used by the Irish Cricket Union for home competitive matches in the Republic of Ireland.

Karl sets himself high standards. There is not a blade of grass out of place, no litter, a very prim and tidy ground. He has been with the club since leaving school and has now clocked up sixteen years service.

He began his career in 1991 and, after six years, was appointed Head Groundsman. As well as his time at Clontarf, Karl has gained a substantial amount of cricket experience from his time working overseas. In the early days Karl was only employed at Clontarf during the playing season. To fill up his time Karl arranged to work overseas on grounds in South Africa and Australia.

With the experience gained Karl began to raise the standards of the ground at Clontarf. Soon it was being chosen to host international matches, a great compliment to Karl for all the hard work being put in at the ground, the early highlight being a World Cup Match between the West Indies and Bangladesh
The club is constantly in use during the season. Training takes place on Tuesdays, Wednesdays and Thursdays and there are also midweek and weekend matches. It has now got to the stage where Karl is working every day to keep up with the demand for cricket.

Karl is the only officially employed Groundsmen. However, he does have a number of committed helpers who lend a hand to move covers, flat sheets and help out on match days.

To get a flavour of what Karl was up against here is an extract from his working diary: "Two pitches, one for the first two matches then the other for the Ireland v West Indies game. Preparation started for pitch one on the 27th of June, and the 3rd July for pitch two. 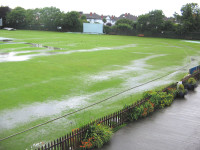 Constant bad weather hindered pitch preparation throughout. There were only two days of sunshine and no rain! There were also days where you couldn't roll due to constant rain, or the outfield was too wet to take the roller out!! So the covers were on and off on numerous occasions. I tried to get as much natural light on the pitches by getting the covers off at first light and putting them on at sundown.

This was obviously interrupted at times due to more rain!!

This turned out to be so true! An inch of rain fell on the Friday! The whole day was spent checking under the covers to make sure no rain was getting in! The Blotter was doing overtime running around the edge of the groundsheets to prevent any water running down the hill under them. The 'slope' is 7 foot diagonally from the scoreboard to the carpark. It eventually stopped at 6.30pm so off came the covers to 'blot' any wet areas. It was too wet to bring out any machinery but there was plenty of other work to be done. The pitch was marked and the fielding restriction marks were put down and the boundary rope was placed and pegged down. The covers went back on at sundown.

One thing happened that I had never seen before. The weather was wet but very humid. The amount of sweating that occurred under the sheets was huge! It was very wet underneath initially when the sheets came off. There is normally sweating but this was like it had rained. Obviously the combination of the very wet soil underneath and the humid conditions led to this intense sweating. 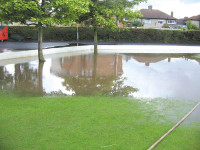 2400 people turned up the next day to see Ireland play the West Indies but after only 17.2 overs the game was abandoned as heavy rains returned. Then the clean up began! 2400 people around a wet cricket ground can make a big mess!!

All in all I was happy with the week. There was a huge amount of pressure on with three matches in five days and the fact that the weather was terrible all along added to it. Long hours and sleepless nights were had but I was pleased with the pitches considering the constant rain. I did enjoy the pressure and the hard work but I also enjoyed my first sleep-in past 6.30am for the first time in three weeks!!!!"like many other clubs Clontarf suffered at the hands of the weather this year, particularly at the height of the season in June and July.

The net result (or should that be the wet result) of all that rain saw ten senior games cancelled with numerous other matches either interrupted or abandoned. A good number of schoolboy and schoolgirl matches were cancelled as well.

However, with funding from the Government, Clontarf were able to purchase a Blotter in April of this year at no cost to the club. You would have to say that this machine has been really put to the test this summer and it has enabled the club to play matches that, in the past, would not have been possible.
Clontarf the club have grand plans to provide first class facilities for international and club matches and there will be much work carried out over the coming winter.

The northern boundary is being improved. This involves moving the existing fence back to its original and correct line. The sightscreens are also been taken off the ground and new screens will be erected on poles and rails so they can be easily moved when necessary. This will enlarge the playing area at the northern end of the ground by approx 20 feet. It will also increase the capacity of the ground, which is all-important when One Day Internationals are hosted. The club will be able to erect temporary stands for approx 4000 people if required.

Additional groundsheets have been purchased to cover the whole square. A new drainage system has been put in and new artificial practice nets have

Hosting Ireland representative fixtures puts a huge strain on the clubs own fixture list which, occasionally, causes debate amongst club members. However, Karl sees it as an honour to host these games and he continues to strive to produce the best playing surfaces in Ireland.

Then I put the seed down on the whole square with a rotary type spreader, the seed I use is 50% cadix perennial ryegrass, 20% barcrown, 25% bargreen chewings fescue, 5% highland browntop. I have been using this seed for a number of seasons now and find it very good.

I then spread my topso

After the whole square is topdressed I dragmat the area, again to level the dressing, then fertilise with Scotts Greenmaster Prolite Autumn fertiliser, 6-5-10+6%Fe.

When that's all done I fence the square off so as to keep any dogs, foxes and children off the area. I keep a close eye on the weather forecast and, if there's no rain expected, I water the square regularly and lightly, ensuring there's no flooding.

Work around the ground

Apart from the square there are various other jobs done when the season shuts down. The boundary rope is stored on a concrete area by the nets. I cover it with the mobile covers. The hoses are taken off the mobile covers.

The nets area is fenced off and the netting is removed. Any repair work needed on the netting is noted and addressed before it comes down. The run ups are reseeded and topdressed.

The spectator benches around the ground are removed and put in storage. The groundsheets are folded up and put away in storage. The outfield is closely inspected and any divot holes or other damage is top dressed and seeded.