by Nicole Wheatley
in Industry News
on 05 Feb 2004 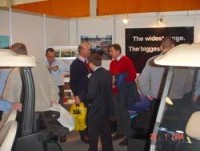 They chose to launch the vehicles at the first influential exhibitions of the year on either side of the Atlantic, namely BTME in Harrogate and the PGA Merchandise Show in Orlando. Club Car's European Sales & Marketing team were on hand in Orlando as well as BTME in order to cope with the anticipated interest in both of the vehicles.

Club Car's stand at BTME was the largest that they have ever taken at the Harrogate Show, and merited the investment. Robert Drewery, Marketing Director of Club Car Europe was delighted with the reception that the new Carryall 294 AWD and Precedent received from existing and potential customers on the stand, "everyone who came onto the stand was keen to get a closer look at both vehicles and were genuinely impressed by what they saw. The Precedent and Carryall 294 are both remarkable in their own right. The Carryall 294 is the most versatile, powerful and durable Carryall we have produced so far, but the unique qualities that set it apart from other vehicles in it's class are that it comes road legal as standard, and unlike other AWDs there are no gears and no differentials to lock."

The Precedent is the first new golf car Club Car have launched since the renowned DS model back in 1980. The Precedent marks a departure from standard golf car design as many of the new features have been introduced to improve the cost of ownership and manageability at user level. For example, Precedent uses fewer parts than ever before meaning it is easier to inspect and service and increases the average life of a car.

Drew Bradshaw, of John Bradshaw Ltd - one of the leading distributors of Club Cars in the UK - is excited by the new car and has found that reaction to the new Precedent amongst existing Club Car owners is pretty unanimous, "so many people have commented on how stylish the car looks and how well it stands up to the demands and image of modern golf. What is really striking though is the improved cost of ownership, which has been achieved by simplifying basic maintenance and improving overall performance. We expect to see Precedent golf cars on UK courses as soon as March this year."

2004 is set to be one of the busiest and most significant years for Club Car in recent history. If initial reactions from both sides of the Atlantic are anything to go by demand for Club Car vehicles is set to reach an all time high.