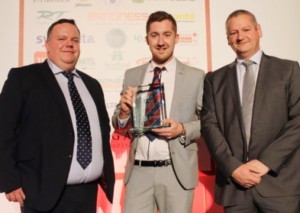 The club and course has had a season they will never forget, which started back in February when Stuart and James were selected to go down to work at the BMW PGA Championships at Wentworth.

They both came back full of ideas, but mainly full of enthusiasm after watching Rory Mcilroy win the European Tour's flagship event.

Then in July, Stuart was off to work at the 143rd Open Championship at Royal Liverpool, Hoylake, which proved to be The Open all British fans wanted after Rory Mcilroy claimed the Claret Jug.

From then on Stuart and his team got their heads down and prepared Dunstanburgh to the highest standard possible with a few older members saying the course has never been in as good condition and it's a credit to the three young men.

The awards aren't just judged on playing surfaces, but on the overall management of each site with all tools and budgets taken into consideration,