Children of all ages from toddlers to late teenagers are set to enjoy a fun filled summer thanks to a new multi games and play area built in a South Yorkshire suburb.

Funded by the Government Safer and Stronger Communities Fund, Section 106 (whereby developers of a certain level contribute towards improving public open space) and the City Challenge Recycled Income Fund, the new facilities serving the Lunwood area of Barnsley are due to be officially opened in May.

"We managed to get the three pots of money together," says Jack Peach, Area Forum Officer for Barnsley Met. Borough Council. "We have a green space strategy which indicated that the area, which serves a population of approximately 5,000 was poor in regard to quality play facilities. During consultation with both young people and adults, it became clear that we needed a toddlers play area, a multi games area (MUGA) for football, basketball etc., and a skate park."

The site, originally a refuse tip, but developed into playing fields in the 1960s and early 70s is also used as a short cut to the school and the new design incorporates a tarmac footpath and floodlighting to improve safety.

"The multi games court and children's play area on one side of the footpath and the skate park on the other form a compact play zone overlooked by passers by," says Peter Carter, Senior Landscape Designer for Barnsley Met. "We wanted the new facilities to be virtually self policing."

J Pugh-Lewis, who won the construction and project management contract needed to complete the work in the shortest possible time to avoid vandalism. "We were given a six week time slot just before Christmas," recalls Tim Pugh-Lewis. "We stripped the top soil, re graded, put kerbs around the MUGA and skate park and laid the base course tarmac before putting in the fence posts. Once the wearing course tarmac was down the three metre high, heavy duty fence panels went up around the MUGA." The ramps and grid rails for the skate park were installed and the project was on schedule. With the new footpath completed, J Pugh-Lewis were about to continue with the toddlers play area when a severe cold snap held up proceedings.

"This area needed an EPDM safety surface," Tim continues. "On a fine warm day it sets in about two hours, but under these conditions it took nearly two days. We had a fence around the play area but the kids could still get in and the last thing we wanted was footmarks all over the surface. We built a double fence and hired overnight security guards. Towards the end of this sort of contract everything has to happen in the last two or three days before the handover," 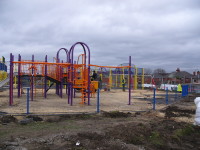 "J Pugh-Lewis are very efficient and despite the weather conditions they completed on time and brought everything together successfully," reports Peter Carter. "We had very few instances of vandalism and now that the new games area is complete, the children seem to be enjoying it."