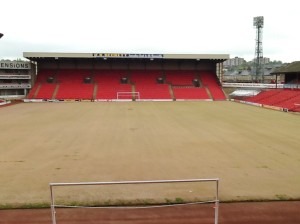 A visitor to the home of Barnsley FC at Oakwell stadium will encounter a stiff breeze and a pitch that is not over blessed with natural light.

But head groundsman Karl Fulford strives for nothing less than a pitch that looks, plays and performs to the highest of standards.

"At the end of the 2012 season we did a full stadium pitch renovation," Karl explained. "Against my better judgement we reseeded with a variety selected largely on its deep green appearance.

The grass did not do well and came out of winter in poor shape. Its recovery was slow and I knew I would have to reseed again this year - a blow to us as budgets are very tight here.

Karl researched the market in order to select a mixture better suited to the ground and to demonstrate the folly of making a selection on appearance alone.

"I prioritised wear resistance, shade tolerance and winter recovery," says Karl. "I then spoke to other groundsmen to see what they were using and how they were getting on with the mix they had chosen.

One seed mixture that stood out was the perennial ryegrass based Premier Pitch from Johnsons Sports Seeds."

The last match of the season was played over the May Bank Holiday and, with the new seed delivered, Karl was able to set to work on May 7th.

The pitch was stripped using a fraize mower and re-seeded by the 10th May - barely 8 days later the iSeed coated mix had germinated strongly and evenly.

With no disease issues and strong germination the pitch was looking good by the middle of June, much to Karl's relief.

Even more so when the club informed him on the morning of 3rd July that it was to host a friendly fixture against the Belgium side, Club Brugge, on July 12th! 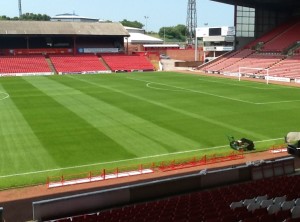 Karl again, "We all experienced the same cold spring and early summer, but it has also been dry here. The stiff breeze, that is typical at Oakwell, only added to the difficulties one would expect in establishing a new grass.

But the strong early germination really helped the new seed to get going. I think the iSeed nutrient coating we specified really helped in this respect."

Having seen Premier Pitch at other clubs he's confident it will do well through to next spring - certainly a lot better than the mix he replaced; something he'd like to do on the academy grounds if he can convince the management of the investment.

One last thought from Karl, "Modern football demands pitches of ever improving quality and achieving this on a tight budget is not easy. But with the help of modern seed mixes it's a possibility."