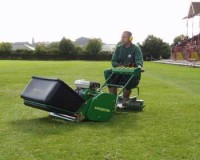 The prestigious Stewart's Melville College in Edinburgh places great emphasis on sport and physical education. Rugby, cricket, hockey and the other games played on the college playing fields are valued for promoting fitness and a sense of teamwork in boys ranging from 11-18.

Maintaining the turf surfaces in peak condition is given high priority, and central to the college's grounds care regime is its Dennis G860 pedestrian mower.

Head Groundsman William Purdie is not alone in being impressed by the machine's performance. "The governing body for school and college playing fields in Scotland has stated that the Stewart's Melville pitches are the best that they have seen this year," he says.

"The G860 is perfect. It gives a precise, sharp cut and the fully variable drive enables the optimum cutting speed to be set. It's also just the right weight to gently roll the turf during mowing without any risk of compaction."

The 86cm (34in) wide G860 has a 6.5hp Honda petrol engine and weighs only 166kg. It incorporates a steel-geared differential in an oil bath for easy turning without scuffing the grass,
and a cast, 3-section aluminium ribbed roller ensures positive traction.

Like other Dennis mowers, the G860 is straightforward to use and service points for routine maintenance are easily accessible. Mowing height can be adjusted quickly between 0-56mm.

William Purdie's G860 is fitted with an optional trailer seat for extra convenience. Fully adjustable, it incorporates a roller that further helps to smooth the sward.


The G860 is a heavy-duty model derived from the successful Dennis FT range of precision mowers. Each can accept interchangeable cassettes for other essential maintenance tasks, extending the efficiency and versatility of the British-built machine. Available attachments include a turf brush, scarifiers and verticutters.

Dating back to 1832, Stewart's Melville College has a reputation for educational and sporting excellence - something that its Dennis G860 is helping to preserve.