I paid a visit to the International Fair for Amenity areas, Sports and Pool facilities, held in Cologne on the 26-28th October. This was my first visit to FSB and Cologne. The event was held in the Koelnmesse exhibition centre in the centre of the city along the bank of the River Rhine. This show was so big that it was held on three floors, the ground floor was mostly home to the Pool Facilities with the other two floors dedicated to sport.

The event was opened by Pele and attended by exhibitors and visitors from all other the world, the greatest number of exhibitors were involved with sports flooring, from Basketball and Squash to Multi-use including natural and artificial turf. 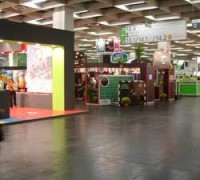 To be brutally honest though the natural turf side promotion was almost non existent whereas the artificial turf delegation was absolutely huge. Taking off my over protective "stadium football must be played on grass" hat, it is amazing to see how much artificial grass has come on in recent years.

There are now several different yarn suppliers with large ranges of yarn in different materials, different thickness, fibrillated or monofilament, spiral twisted, different colours and even hollow yarn which was displayed with water being pushed through at a very low pressure forming dew drops on the end of the tip. However the latter and also a fluorescent yarn are probably more gimmicky than practical but were a bleak reminder of how quickly this Industry is moving and how much money is available in the artificial turf world. On a side issue can you imagine playing football at night on an artificial turf where the only light came from a fluorescent turf? The mind boggles.

It's not just the yarn that varies, there were companies selling various different backings and then there were the filling materials, who said rubber is only black, there are companies making it in all the colours of the rainbow. Again looking from a non-Groundsman perspective some of the artificial turf with a fibrillated fibre in two different shades of green using a mid brown rubber in fill did actually look very real. There were also companies showing different shock pad materials and construction textiles. A lot of spin off companies are now building dedicated machinery for the construction, repair and maintenance of these new artificial surfaces. 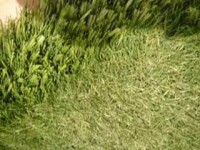 What's a bit disturbing is how many manufacturers were using not only pictures of stadiums or teams on their stands but some actually had professional players on hand to promote their products, not just minor players but ex-international players at that. However on talking to a lot of the bigger manufacturers they know that these artificial carpets will not take the place of natural turf in stadiums where the climate allows good grass growth. It seems that their main target is the schools, councils and sports clubs. The only time it will hit the professional game in the next few years could possibly be in countries where the climate is difficult to grow grass or the countries don't have the money to upkeep natural turf such as some of the African nations. It could however, be argued, that for the cost of installation and basic maintenance of a synthetic surface, the upkeep of a natural turf surface would be considerably cheaper. For me the biggest selling point of artificial turf is the high level of use it will take.

Back with my 'Groundsman's hat' on, I accept that artificial turf has its place, I am interested to see whether there are any long term effects to players with regards to injuries, something that won't come to light for some time to come. Even the very new fibres and rubber in fill and shock pads still do not respond in the same way as natural grass, if you punch your hand into natural grass it absorbs the impact, if you punch your hand into a well built artificial your hand comes bouncing back, what is that doing to players leg joints and back in the long term?

As a potential buyer of artificial turf, what a mine field of products out there, I think the best way of selecting one is to visit as many different constructions as possible and speak to as many different users to get a balanced perspective.

The future is green but will it be natural, plastic or both?