by External source
in Industry News
on 31 Oct 2014

0 Come on council... cut the grass on our footy pitches!

ROCHFORD Council has been criticised over the state of the district's football pitches. Players from Southend Sunday League side Brush Rangers have complained about long grass and dog mess on pitches at John Fisher Playing Fields, in Rayleigh The club says the state of the pitches means the £800-plus it pays the council to play home games there is too much. 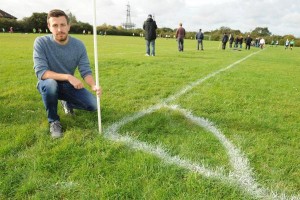 Club chairman Roger Martin said: "It has never been the best of pitches, but the prices go up and up and the pitches keep getting worse and worse.

"We have enquired about playing at King George V field in Rayleigh, which is much better, but it's full.

"For the money we pay, the pitches aren't maintained at all. Having spoken to the groundsman, apparently they don't even have the means to cut it. We have had to clear up dog mess before we play and on October 12, the grass was unplayable."

The club shares the three pitches at the site with youth teams, but Brush Ranger player Neil Richmond feels they are unsuitable for young players.

He said: "How can a young, aspiring footballer hone his skills playing on a pitch with grass in excess of three inches long?