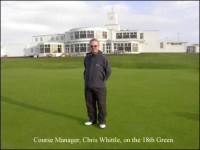 The Open Championship is returning to Royal Birkdale, following a 10 year preparation programme to extend and upgrade standards on the course. These changes have now reached maturity and the course, always a strong Open venue, is ready to meet the challenge of hosting its ninth Open Championship.

Throughout the last 10 years the club has been able to rely on the support of STRI, working as official Agronomists to the R&A championship committee. Stuart Ormondroyd, Head of Turfgrass Agronomy at STRI has been working with Chris Whittle, Course Manager and his team.

In the attached article "Come rain or shine", he outlines the course changes & preparations that have been put into place for this year's Open.

Is it really 10 years ago since Mark O'Meara battled through the weather and a play-off to win with a score of par on the windswept Southport Links? It is indeed the case so the return to Royal Birkdale on the Sefton coast in July is anticipated with relish. However, how many of the general public realise that the planning process to prepare the course for 2008 started as the grandstands were being taken down in 1998?

With expectations of playing quality constantly rising from all quarters there is even more of a need to extend and upgrade standards on all areas of the course, and in particular pose new challenges for the worlds best golfers. These basically fall into 4 categories:-

Public access and movement around the 1st tee area has been improved and in conjunction with landscaping around the Clubhouse, new car parking on a single level has been introduced as well as upgrading of the Clubhouse complex.

In addition to the existing practice putting green the practice chipping green and surround has been upgraded and two new raised practice tees built; one of which will be used for the Open. Overall access has also been improved to provide better public viewing.

3. Ecology and the environment

All visitors and players who witnessed the 1998 Championship will notice a major visual change to the general landscape as part of the dune restoration programme. Non-indigenous blocks of trees have been removed to good effect, especially on the 15th to 18th holes, which in turn opens up the views across the course and beyond, plus the enhanced visual feast for the spectator on what was already an excellent viewing course. 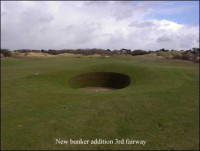 Ecology management of rough also has seen removal of ivy covered banks in the rough on the 5th and 6th holes which in turn has been replaced by native grasses. Indeed, the overall theme is one of restoration of the native dune system and development of habitat improvement for fauna and flora, including initiatives such as extending the slack systems, which are already evident on holes such as the picturesque par 3 12th.

The brief was not to increase the length of the course unduly so only 155 yards has been added, giving a total of 7,173 yards. Instead the accent has been more on strengthening the course and this has included one new green at the 17th plus 20 new hazards. More specifically 6 new tees and the addition of 16 fairway bunkers have tightened up the tee shot making players consider a number of strategic options. This has been further enhanced by re-contouring of green surrounds through the introduction of mounding and swales, which promotes more imaginative recovery shots from around the green.

This is no more so demonstrated than at the 16th with a new Championship tee (adding 22 yards) into the prevailing wind tying in with re-contouring of the surround behind the green and tree removal, making the approach shot much more testing than in the past. The same can be said of the 17th, which with the existing Championship tee at an angle to the previous sight line and against the boundary fence, has been strengthened through tighter fairway bunkering and mounding at both 310 and 320 yards. The cross bunker has been moved left and mounding enhanced for the approach shot. There is also more penal bunkering around a contoured green.

Positive changes will also be noted at the 9th which is a now a pronounced dogleg to the left. In fact reading the press release on course changes it is interesting to muse on the fact that fairway bunkers on championship golf courses are now being placed at 300 to 320 yards when some of us can remember changes from 250 to 270 yards!

The decision to increase staffing levels and machinery resources plus the tireless hard work of Chris Whittle the Course Manager and his team has enabled the Club to deliver the course in enhanced condition for The Open Championship and for general play in non-championship years.

Royal Birkdale has always been a strong Open venue and these gradual changes over 10 years are reaching maturity and have been designed so that the challenge can be maintained. In addition, any Open venue course must now be in peak condition, whether we experience torrentially wet cold conditions as happened at Carnoustie in 2007, or severe drought at the time of The Open at Royal Liverpool in 2006. Therefore, in addition to architectural changes the general course management programme over the last 10 years has included pipe drainage introduction into low lying areas of the 15th and 16th fairways, clearing of ditches and outlets plus sanding of fairways all aimed at improving the dryness and firmness of areas susceptible to moisture retention. On the other hand encouragement of drought resistant grasses on greens, green surrounds, tees and fairways in conjunction with a revised aeration and wetting agent programme will ensure the course can withstand hot dry conditions.

So, come rain, wind or shine Royal Birkdale is ready to meet the challenge of hosting what is their 9th Open Championship and everyone involved in the event is waiting in eager anticipation for July to arrive.