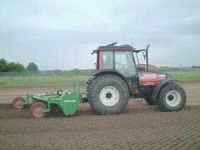 Town and Country rugby is benefiting from the Community Club Development Programme; the government lead initiative, which resulted in 50 UK clubs being earmarked for investment.

Overseen by Sport England, (the governing body to the RFU) and managed by Total Turf Solutions, appointed by the RFU as lead consultants, the project has taken Wiggington based Seward Turf Maintenance to both city based Leeds Corinthians, and the smaller, more rural Hollis Recreation Ground, Hornsea on Yorkshire's East coast.

"Although we've been here for 17 years, this land used to be a rubbish tip," explains Andrew Parker, York Corinthians' secretary, "and it's the first time it's been renovated."

Centrally situated, not far from the A 1 motorway and within easy reach of the Yorkshire Development Officer, the Corinthians' two rugby pitches are used not only by their own club teams, (3 adult teams and 4 or 5 junior teams) but also for Yorkshire county trials and matches.

"One of our pitches was not really useable," continues Parker. "It suffered from poor drainage and very poor grass. We more or less had to dig it up and start again."

Seward Turf Maintenance arrived on site in May, and their first job, as directed by Total Turf Solutions was to kill all the weeds. 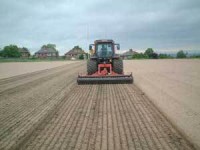 "Everyone said it would never be ready in time," remembers Parker, "but looking at it at the end of August, was like seeing a completely different patch of land. Our first match, a friendly, on the 28th Aug. was an away game, but we were set to play our first league game on the new pitch a week later."

Don Copley, Rugby Club Administrative Trustee at Hollis Recreation Ground, Hornsea is taking a longer term view. With football, hockey, tennis and cricket clubs all involved in the same area, much of his time is spent juggling the demands of winter and summer sports.

"Our present 1st team pitch overlaps the cricket outfield and is not available at the start and finish of the rugby season," he explains. "The second pitch had the old agricultural ridge and furrow drainage which meant that there was 400mms difference between the ridges and furrows on the surface, resulting in flooding during wet weather."

Seward, under contract to York based J. Philliskirk and Son, stone buried, power harrowed and Blec laser graded the second pitch before handing the job back to Philliskirk to install new drainage. Following a three-week hold up due to torrential rain, Seward returned to site and applied 300 tonnes of sand, before top dressing and re-seeding.

"Despite the extremely wet summer which has delayed the work, we're hoping that this pitch will be playable by November," continues Copley. "Seward will be performing on-going maintenance work throughout the winter on our other pitch, and we'll make judgements as the year progresses. Whatever happens this pitch will have to be in play by 1st. April. It'll become our first team pitch, thus releasing the other area in time to prepare the cricket outfield for the summer season. Looking at it now, we're very optimistic."

For further information on the services of Seward Turf Maintenance, contact the
company on Tel: 01904 765949.