Thanks to a £2m investment from the Premier League, FA and Government's Football Foundation, work has officially begun on NUCASTLE - a new multi-million-pound community hub based in Newcastle.

Identified in Newcastle-upon-Tyne's Local Plan as a priority project, the new facility will be home to the Newcastle United Foundation and is set to serve thousands of children, young people, adults and elderly residents from across the North-East of England.

Spades struck ground on the site of the former Murray House Recreational Centre earlier this month, demolishing the disused building to create a community hub championing excellence in education, employment, and physical and mental wellbeing.

Residents, Newcastle United Foundation staff and participants, and former members of the Murray House Recreational Centre all came together at a social distance to celebrate breaking ground on site.

Club legend and Foundation Patron, Shola Ameobi, was among a select group who came together to celebrate the start of construction at the site. He recalled some of his childhood memories playing football at Murray House and shared his hopes for the future of the area.

"I grew up here with my family in the West End and Murray House is where I would play football and meet friends as a kid."

"I have some great memories of the place and back then it was absolutely at the heart of the community - it was a place everyone felt happy and safe."

"Sadly, it all fell into disrepair and the community here have missed out on access to somewhere they can meet, play, learn and focus on their futures." 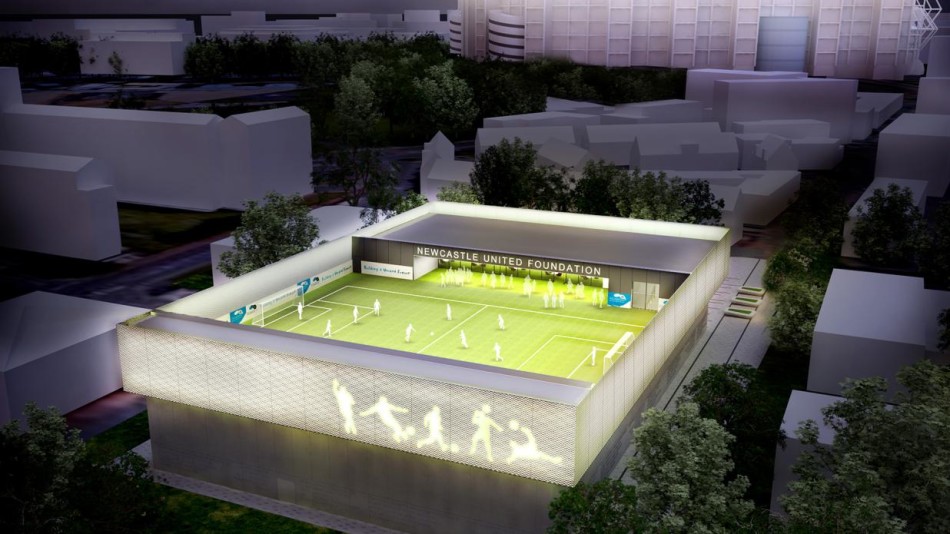 "It is so important we bring this area back to life and I am incredibly proud to be part of the Newcastle United Foundation and its vision of creating a safe, innovative and inclusive space for residents of all ages to achieve their potential."

As well as a home for the 120 members of staff at the Newcastle United Foundation, the new hub features an artificial grass pitch located on the roof of the facility, offering participants some spectacular views of St. James' Park.

The site will also include four digital learning suites, a specialist STEM classroom, a high-tech digital hub, smart fitness suite, sports hall and accessible changing areas, and event and meeting spaces. It is expected that more than 100,000 people will visit each year.

Robert Sullivan, Chief Executive of the Football Foundation, said: "The news that works have officially begun on Newcastle United Foundation's brand new facility will undoubtedly provide a boost for grassroots sport in the North-East. Funding from the Premier League, The FA and the Government, through Sport England, is playing a vital role in making the project a reality."

"Thanks to their investment, Newcastle United Foundation are one of many clubs and organisations across England set to benefit from a state-of-the-art new facility. These facilities not only act as excellent physical and social outlets for communities but also provide new jobs - during construction and in the years to come, with people needed to support sites in delivering safe and positive environments for any user."

NUCASTLE is expected to open its doors in March 2021.