I am 30 years of age, and this is my third year at the community project in Middlesborough. Prior to taking the job here I had no previous experience in groundsmanship and worked in a foundry on the finishing benches making digger bucket teeth. 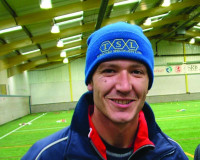 I was really bored and saw this position advertised locally, so I thought I would give it a go. Both my dad and my granddad were farm workers, so I figure it's in my blood to do this sort of work.

I am the sole groundsman for the whole site and my jobs range from litter picking all the way through grounds maintenance to servicing all our machinery.

Earlier this year I went on the Pitchcare Winter Sports Turf course at Carlisle United. I took Malcolm, my line manager, as I felt it would be useful for us both if he came along. He now knows what I'm on about, at least half the time!

There has been a lot of grant funding ploughed into the complex, which is the home of Middlesborough Football in the Community. As part of that funding we were able to purchase some fantastic machinery to help me carry out my work schedule.

We have two tractors, a Kubota STV32 with loader and a Yanmar LD18, which I use in conjunction with a 5ft Major rotary deck, as well as an Agri-Fab spreader and sweeper and SISIS drag brushes. I have two brushes, one that I use for the natural grass and one specifically designed for use on the synthetic surfaces.

As well as the rotary deck for cutting surrounds, I cut the grass pitches with a Toro 2000D Reelmaster triple mower, letting the clippings fly; we don't have anywhere suitable to collect them anyway, and it returns nutrients back to the soil. 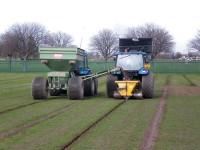 For tidying up around the buildings, tanks and pathways I use an Etesia 20" pedestrian rotary mower. To finish my machine list, there's a line marker, strimmer and Husqvarna 30cc hedge trimmer.

While I shouldn't grumble about all this brand new equipment, I would still like to acquire a slitter, vertidrain and a seeder (well, that's the wish list for now anyway!)

I aim to cut the pitches outside three times a week, Monday, Wednesday and Friday during the growing season, and only when conditions allow during the winter months. I set the height of cut on the mowers at 25mm in the summer and 30mm for the winter, although I might raise the height up to 30/35mm in the summer/winter, depending on the level of wear that shows.

Due to the usage, divoting and litter picking are my constant jobs, as pitches are in play on a daily basis. Friday afternoons are usually set aside for machine maintenance and washing, so they are stored clean and ready for use the following week.

In 2007 we started to apply selective herbicides (using a contractor) and, in 2008, we have done the same, but also applied carbendazim for the control of worm casts. 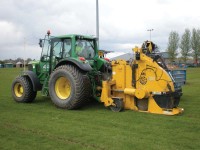 Before the centre became re-branded, not much work had been carried out on these pitches for a long time, other than a weekly cut by the council, in whatever weather conditions prevailed,

I understand that the groundstaff used to come up from the Riverside (Middlesborough FC's stadium) with the trike to mark the lines. At the end of the season they would scarify, aerate, brush and overseed the pitches as needed. Now all the marking out is done by myself, I have two 3" dimple markers and use Grassline heavy-duty paint diluted at 3-1.

In April 2008 we had major renovation work undertaken to our main grassed area that holds the two senior pitches. Firstly, around thirty poplar trees were removed including their roots. A water tank, pump house and Rainbird irrigation system containing seventy-two sprinklers were installed into the field, these include eight infield pop-ups within each pitch and the rest were situated around the perimeter of each pitch. North Staffs Irrigation carried out this work under the management of Cleveland Land Services. 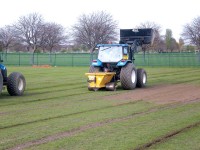 Once the drainage system had been installed CLS applied enough topdressing to add 10-15mm to each of the pitches. The pitches were then overseeded with a disc seeder before the area was brushed and dragmatted to get final levels. It is now within our budget to have seasonal renovations every year, consisting of topdressing, overseeding and vertidraining etc.

The indoor pitch area has also seen a vast amount of improvement. First of all contractors built new classrooms and offices to facilitate E2E (Entry to Employment) students. The existing roof lights were replaced to allow more natural light in, as the original ones were covered with soot from the nearby steelworks.

CLS then removed the existing sand based Astroturf as well as the rubber shockpad underneath it. With the whole pitch cleared a new shockpad was installed and this was given about a week to 'cure' before the new carpet was laid. Following this operation all of the lines were cut and glued in before the rubber crumb was applied to the pitch using specialist machinery. The outer white line of the full size pitch is sown into the carpet during manufacture. 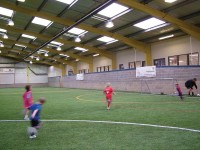 In addition, around 90% of the local schools attend one day courses here (healthy living, PE etc.), as well as holiday courses for kids aged between 3-14. The centre is available for hire for birthday parties every Saturday and Sunday.

My personal goals include gaining as many industry qualifications as possible, such as PA1 and PA6. I aim to maintain these pitches and surfaces to the highest possible standard that I can achieve, and maybe progress to a larger club, maybe even in the Premiership!

I really love the work here, I'm pretty much my own boss and I like the fact that I am left alone to get on with it. No one questions the work I do, or when I do it, so I don't even have to work in the rain if I don't have to ... but, of course, I do!