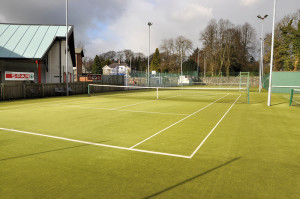 The town of Omagh sits on the western side of Northern Ireland and is home to around 20,000 people. It is quite an active population in sport, as the town is home to numerous rugby, gaelic, football and tennis clubs.

Based on the town's Crevenagh Road, and nestled in between a primary school and a secondary school, lies Omagh Lawn Tennis Club.
It may be a small club, but it boasts a keen membership of professional and amateur tennis players, as well as functioning as a support centre for younger tennis enthusiasts.

The club has four all weather astro turf courts and two mini courts for the junior members, which is good news as Northern Ireland's weather can be quite unpredictable. The centre also has its own clubhouse and a series of floodlights to ensure playing can continue well into the evenings and at all times of the year.

It's quite a social club with various barbecues and other evenings being hosted at the venue throughout the year. With it being such a small club, the man in charge of looking after the place works there on a volunteer basis. Stephen Cuthbertson (pictured below) calls himself the 'volunteer maintenance man' and has worked at the club for the past fifteen years. 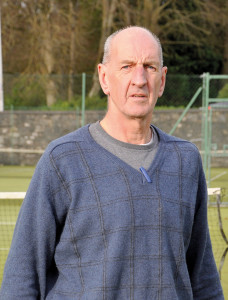 It's a real labour of love for Stephen to look after the place as he has a great interest in tennis as well. In fact, one of the shields awarded to one of the men's singles competitions bears his name.

Stephen said: "I've been looking after things here for the past fifteen years and I really do enjoy it."

"There is a very healthy membership at the club and they like the place to look its best at all times. Even though I am a volunteer, I do have my own little room in the clubhouse for me to tighten and replace tennis racket strings. It's my payment in a way," he said.

"Non-members can also play here at the club, on a pay and play basis, provided the courts are free of course. We have four full size courts here and two smaller ones for the junior members to use. All the surfaces are all weather astro turf which is easier for me to maintain."

"Some of the older surfaces have been replaced over the years, hence the difference in colour of two of the courts beside each other."

Stephen works part-time as well, but always find the time to clean up the courts to ensure they are in the best condition ahead of any tournaments or practice sessions.

Stephen continued: "Being right in the middle of the town, the club is a very popular place for both members and non-members alike. There is always some debris that blows onto the courts, either from the trees nearby or simply from the roads, so that has to be brushed up on a regular basis. 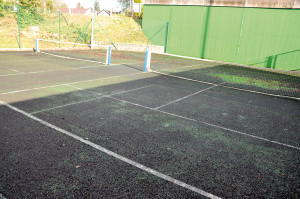 "We've recently had to remove some of the large trees surrounding the club, as they became too tall and were seen as a safety risk. We do place some sand on the surfaces as well from time to time to give that extra bit of grip and to dry the courts off."

"There is always a constant battle with moss going on here, as the site is quite low and near the river. In the winter, the moss would take over if we let it, so I try to keep on top of it."

Stephen also helps out in the clubhouse which contains some offices, his small room to adjust the tennis rackets and a sports hall. There are also some storage rooms for tennis coaching equipment and for a small range of tools that Stephen uses from time to time.

"It may be a small sports centre," said Stephen, "but it plays an important role in the community and I am proud to have looked after it for all
these years."