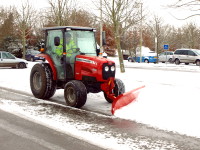 A Massey Ferguson compact tractor has been given a leading role in helping the University of Bath deal with fallen snow and leaves as well as removing for composting the green waste arising from the many borders located on the university's 100ha Claverton campus.

Supplied in mid 2010 by local dealer, H Curtis and Sons, the MF 1547 tractor was specified with Massey Ferguson's clutchless change-on-the-move Dyna-QPS transmission, turf tyres and an air-conditioned cab, three options which are proving spot-on for operations on and off road.

Fast and effective clearance of snow is an essential task for the university's Landscapes Section due to the need to keep open all principal campus roadways for emergency vehicles and for buses arriving from and departing to Bath's city centre and surrounding area. A high number of students and staff also have cars, so precedence is given additionally to ensuring that the university's two main car parks and their access paths are safe and secure to use.

With close to five miles of priority roadways plus the car parks to keep clear, the Landscapes team moved swiftly into action following heavy snowfalls in late November and early December. Equipped with a Tomlin 2m front snow blade and Vale TS500HS trailed salt spreader, the MF 1547 tractor remained at work until all of the hard surfaces to which it had been allocated had been cleared of snow and gritted. 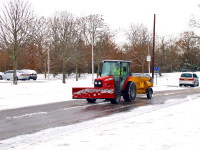 The university's foreman mechanic, Richard Pearson, said it had been a notable performance, completed without any dramas or concerns.

"The tractor has proved a very capable workhorse since it arrived, taking every landscaping job in its stride," he said. "I've been impressed particularly with its engine which seems to produce a lot more power than the 46hp stated in the handbook. The cab is also first class, being cool in summer and warm in winter which makes the tractor ideal for work around the campus at any time of the year.

"It was a collective decision by the entire Landscapes Section to go for the Massey tractor and there have been no regrets whatsoever since it arrived. It's powerful yet compact and everyone enjoys driving it."