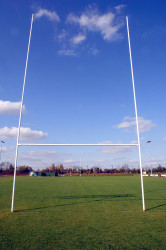 The demands of a 20 acre housing development have resulted in two new pitches for a thriving Suffolk rugby club.

Sudbury R.U.F.C, (home to three adult sides, a girl's squad, a veteran squad and an active youth mini section of 250 enthusiastic players) grasped the opportunity to re-locate, when their old ground was needed by Persimmon Homes to augment the prime development site already acquired.

In exchange for Sudbury's seven acres Persimmon would provide a new ground with room for two pitches and a training area, undertake the initial earthworks, leaving the club to develop a new clubhouse. Head Groundsman and former Club Chairman Andy Mayers says that although a move had been mooted about 20 years ago, the club have been actively involved in this project since 2007. "The deal was that we would have the same amount of land but a better club house with better facilities and pitches properly constructed to a professional standard," he explains.

Stuart Marston, a club member with 40 yrs experience in construction and contracting, has overseen the project. "Basically we had to get a pitch contractor in and we were introduced to J Pugh-Lewis by David Powell, Head Groundsman at Northampton Saints Rugby Club," he says.

Having hired the Chesterfield pitch constructors to laser-grade, drain and re-seed the new pitches Stuart Marston extended their brief to include the pitch-side and boundary fencing, utilising their GPS (Global Positioning System) equipment to survey, design and mark out the pitches and boundaries. "The first team wanted a maximum size pitch but the survey showed us that a second team pitch of the same size would not fit within our legal boundary," Stuart continues. "It could have been a lot more complicated. We needed two pitches, a clubhouse and a car park and had to ensure that everything would fit onto our land."

Director James Pugh-Lewis says that the company has been using GPS since the end of 2007. "It's essentially become a one man survey tool," he explains, "allowing us to carry out detailed surveys very quickly. And once we've completed the design work we can upload this onto the GPS in order to set it all out quickly and accurately on site. At Sudbury it was used for setting out everything from the position of the drains and floodlights through to the rugby posts themselves."

Once the earthworks were complete, J Pugh-Lewis laser graded before trenching in the floodlight cabling and installing a comprehensive drainage system of pipe drains and sand slits. The company then cultivated the two new pitches and ameliorated them with sand, prior to seeding in August 2008. The club wanted to leave the pitches to grow-in for at least 12 months, which gave J Pugh-Lewis time to complete their extended contract.

Acoustic Barrier fencing was installed along the boundary between Sudbury's new ground and the Persimmon housing development and post and rail fencing erected on the southern boundary and around the first team pitch. As the northern boundaries were already marked by high hedging, all that remained was for J Pugh-Lewis to erect the new goal posts. "Having been initially hired for the new pitch construction we've found ourselves providing a much more complete package from design to fencing," says James.

On 13th September, Sudbury RCs new ground was officially opened by Brian Williams, past president of the RFU.

For further information on the comprehensive services of J. Pugh-Lewis, contact the company on Tel: 01773 872362