Glen Miles has been Head Greenkeeper at Strawberry Hill Golf Club for nearly four years. Here he talks about a compost tea programme he is using to restore the greens.

"Strawberry Hill Golf Club is located in Twickenham, Surrey and is surrounded by a highly populated area. The 9 hole parkland golf club is 109 years old and was designed by the golf professional J.H. Taylor. The course has not changed a great deal since the early years, so I'm told.

Set in a mere twenty-seven acres, it boasts some challenging holes like the 4th, which is a good 250 yards par 3! The greens are soil based and are relatively free draining in design.

I began my career over seventeen years ago on an 18 hole golf club, just two miles down the road. I spent thirteen years there before arriving at Strawberry Hill in January 2005 as Head Greenkeeper. With only myself and one other person, it was a monumental task to improve conditions here at the club.

When I arrived at the club, it was evident that the greens were of top priority. They were predominantely poa based with many high in thatch, which left them wet and prone to disease. All of which led to minimal root structure and poor air movement. I also looked at the chemical records to see what chemical they had been using as these conditions favoured fusarium. The records showed around ten applications of fungicide per annum to fight off Fusarium - even spraying in the month of June! 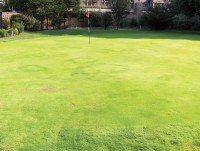 My aim, over the next 3-5 years, was to degrade the thatch, incorporate more air into the soil, and increase the root structure with mechanical means as well as the use of Symbio products to help improve our soil biology and, hopefully, minimise chemical use.

The first year I used sixty tonnes of topdressing, (which I considered to be a lot for a 9 hole golf course) to help push through the thatch and to help with surface firmness, drainage etc. I also spiked the greens every two weeks, using a vertidrain, to get as much air into the profile as I could, and to help the fungi that we had applied to begin to degrade the thatch and turn it into a plant available food source.

Unfortunately, every time I spiked the greens in the first year, large areas of grass were being pulled away from the surface because of the lack of root structure. It took some time after spiking to put the grass back, 'like a jigsaw puzzle'!

Some members were angry, but the majority were patient and, with a little education, they came round to my way of thinking.
2009

We are now four years into a five year programme and seeing great results from our efforts. Our soil biology has improved and our root structure is very healthy. The incorporation of finer grasses over the last three years has been excellent. Drainage is good and members are happy. 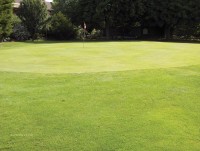 The use of Compost Teas over the last year and a half has been very promising. We are now down to spraying fungicide once a year. Any recovery from disease is very fast. I have complete faith in its use as the results are speaking for themselves. Our topdressing amounts have reduced from sixty tonnes in the first year, to eight tonnes this year. Spiking of the greens is done every four to six weeks, along with occasional sorrel rolling, instead of every two weeks.

We took delivery back in February of 2005. The brewer comes with some pipe-work and an air pump. It has a maximum capacity of 750 litres. There are two outlets from the bottom of the brewer - one is for the compost tea (top outlet) and the other is the left over waste (bottom outlet). The additional pipe-work fits to either of the outlets to help transfer the tea from the brewer to the intended source of application equipment. The air pump hose connects to the outside base of the brewer with a connector and hose. When switched on (with water in the brewer) the pump delivers air to the inside of the brewer via small holes in the base. This delivers air to the microbes in which to grow.

The compost tea packs, comprising compost, sugars, humates, humic acids and microbial foods, plus plant extracts, are a separate cost. Each 100 litre pack will be sufficient to cover one hectare. The compost tea extracts bacteria, fungi, protozoa and nematodes from the compost within the brewer.

After the brewing cycle, the pump is switched off for ten minutes to allow the compost within the brewer to settle. Then, to decant the tea, the additional hose is fitted to the top outlet. This can then be taken out of the brewer and put into a source of application equipment.

Our method of application is a truck mounted sprayer. I generally fill the sprayer to the designated mark and, again, leave the water in the sprayer for 1-1½ hours to dechlorinate before I add the compost tea. As microbes are sensitive to the chlorine, it is the best practice.

To diversify each of my brews, I vary the times of each brew. I also add small amounts of fungal food (humic acids - seaweeds), either in the brew or in the application equipment, to help with the transition of microbes to the greens." 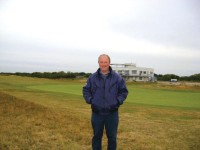 Lauchlan Millar has been Head Greenkeeper at Hayling Island Golf Club for the past three and a half years. The 46 year old comes from a large family of greenkeepers that has produced eleven Head Greenkeepers over the years, which is now stretching into a fourth generation.

Hayling Island is a Links course off the south coast, with magnificent views of the Solent and the Isle of Wight beyond.

Lauchlan has been using Compost Tea since 2007, spraying roughly every three weeks from April until October as part of a programme to increase the percentage of fine fescue grasses in the greens. "The results, so far, have been good" says Lauchlan. "It has enabled us to quite significantly reduce our fertiliser inputs from 90kgs N in 2006 to 60kgs in 2007 and down to 30kgs in 2008." 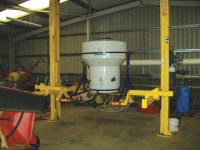 "We have found the brewing process to be easy, especially after Roy Olden, our mechanic, has built a special frame for the brewer which utilises our lifting hoist."

"Initially, we did have some problems with filters and nozzles blocking up, but have cured this by raiding my wife's lingerie draw and 'borrowing' a pair of tights which we use on the end of the hose as a filter when the brewed up tea is decanted into the sprayer." 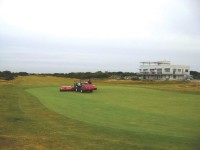 "A little bit of forward planning is needed as the tea needs to brew for 18-20 hours, but everything is mixed up by 8.00am on day one ready for spraying at 6.00am the next day."

"The actual spraying process is equally as simple thanks to our shrouded spraying system which is essential as Hayling, being exposed, is a very windy place."

"Cleanliness is essential and, after use, both the brewer and sprayer are thoroughly cleaned and sterilised."