Assumptions that deep, compressed air aeration treatment is unsuitable for cricket squares were called into question recently, when Terrain Aeration demonstrated their Airforce terralift machine on a wicket at Reaseheath College.

"Cricket squares are always deliberately compacted on the surface to get a good bounce of the ball," explains Richard Murray, who, as Head Greenkeeper and instructor at Reaseheath, was responsible for organising the demonstration. "Usually, they have a clay surface, you top dress with a clay base product and you're constantly rolling with a heavy roller to get the hardest surface possible. People tend to be wary of the terralift's air injection system because they think it disrupts this surface. What they don't realise is that you often get severe compaction further down which not only causes drainage problems but also affects the performance of fertilisers. A lack of oxygen discourages the micro-organisms needed to make the fertiliser work." 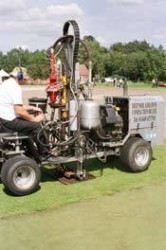 David Green, MD for Terrain Aeration was taking no chances. "By inserting the probe along the edge of the wicket we ensured that the whole underground area was treated, without disturbing the true bounce of the ball," he explains. "As we work to two metre spacings, this meant that there was no need to make probe holes all over the surface and we could limit ourselves to two outside lines. Once the probe was in place we injected compressed air up to 20 bar (280 psi) adding dried milled seaweed on the final air blast, which will stick to the walls of the underground fissures and swell on contact with moisture. In this way the newly created air channels will remain open."

The process was repeated ten times along each side of the wicket, which concluded the demonstration, and by the time Richard Murray took his roller to the surface he found that it had completely settled, and "there was no problem with it."

Dr. Tim Lodge, senior agronomist and southern area manager for the STRI says that although he's never seen this particular treatment in action on a cricket wicket, he's familiar with it on other sportsturf areas and is impressed with the depth of aeration achieved. "At the end of the season you're as well to open up the wicket as much as possible, and so long as there's no volcano effect on the surface, it's ideal," he commented.