I recently had the pleasure of being invited to talk at two Groundsmen Associations meetings (Warwickshire and Nottinghamshire) and, initially, I was undecided as what I would talk about. However, the recent test matches in Antigua gave me plenty of food for thought.

I ended up preparing a presentation on "The current state of Cricket". If we cannot get it right at International Level what chance have we got at grass roots or anything in between?

The presentation focused on several areas of cricket :-

With over 40 Groundsmen attending, along with a couple of Pitch Advisors and contractors, we had some interesting debate about the maintenance of pitches.

It was recognised that the ECB was working very hard to support cricket at every level and was continually looking at improving the way clubs received appropriate funding and services. However, many clubs below a certain level (Non focus clubs) generally were finding it hard to get funding.

I was keen to point out that clubs needed to know where they were going in respect of club status. What level of cricket do they want to achieve? However, this could be compromised by geographical location or, indeed, by the physical size of the ground and the condition of their facilities.

However, for me the most concerning issue facing cricket clubs, especially the grass root village cricket clubs, will be in respect of resources available to them, particularly with reference to people and equipment.

For a lot of clubs the grounds are managed and cared for by volunteers, and I know of many who regularly put in excess of 25hrs a week maintaining and preparing the grounds for play. Also, much of the equipment I've seen in the sheds is on its last legs or not good enough for the job or, indeed, in some cases, not safe for use.

Many of these unsung heros have served their clubs for many years (as players, committee members and groundsmen) and are now getting to an age when they are likely to be giving up their roles. My question is - who's going to take up the mantle? Not many of the younger generation of players are remotely interested in becoming involved in groundsmanship. 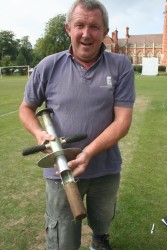 As for equipment a lot of it is old and worn out and, in some cases, not fit for purpose. We are certainly not going to encourage the next generation of volunteer groundsmen to take up managing the grounds if the equipment they have is poor and inappropriate.

What's the point of spending a lot of money on materials e.g. loams /seed and applying to a poorly scarified square. Or losing a lot of time trying to start/repair machinery on a regular basis or, more importantly, expect someone to use unsafe machinery.

Clubs need to inspect, seek advice and update machinery, or hire contractors to do the specialist works, for example end of season renovations, spraying and seeding operations.

Clubs could also save time and money if they were to share equipment and resources. Why not buy a top spec scarifier and aerator between 2-3 local clubs, and help one another with end of season renovations?

I also emphasised how important it was for groundsmen to measure and record the condition of their turf and soil profiles. Taking soil samples helps understand what's happening beneath the ground. A physical inspection of a soil core can reveal many issues, root depth, thatch levels and root breaks. Understanding your soil is key in the management of pitch facilities.

However, the bottom line on all this - there is a cost for providing and maintaining cricket facilities. Having dedicated people who are prepared to do the work without pay is a bonus and should be recognised.

Talking to a number of suppliers and contractors I have come up with some realistic costings for the annual maintenance of a typical 10-strip square:

Annual maintenance of square/outfield using volunteer workforce and own equipment will be between £1500-£2500 (cost of materials & services such as mower sharpening, seed, fertiliser and loam).

Contractor rates for end of season renovations (scarification, aeration, fertilser, overseed and topdress at a rate of 7-8 bags of loam per strip) £1000-£1500.

We can break down these costs further to get a final per player cost.

Break down of costs

Total cost of annual maintenance, renovations and cutting outfied based on a 10 strip square - £9000

Very cheap by anyone's standards and, obviously, it works out considerably less when a lot of the work is undertaken by volunteers, as is the case with a large number of clubs.

It goes without saying that the presentation, condition and performance of the square and outfield are vital in the role of promoting, attracting and developing cricket at all levels. The future of club cricket depends on the prosperity of the clubs and how they run and function but, in particular, the role of the groundsmen should be better understood, respected and supported - and valued.

The ECB and the County Grounds Associations should be applauded for the support they give to clubs.

The opportunity to meet up with fellow groundsmen and industry professionals and advisors is essential for the development of groundsmen. So, I would like to thank all the Groundsmen who made the effort to come and hear me speak, it was a pleasure to share experiences and information.