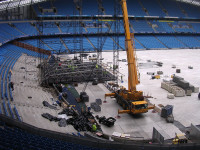 Just what impact does a herd of George Michael fans, heavy plant equipment and Rola-Trac covers have on the compaction levels across a football pitch?

Lee Jackson, Deputy Head Groundsman at the City of Manchester Stadium, has been finding out

Following the George Michael concert at the City of Manchester Stadium on June 15th, I thought it would be useful to measure the compaction levels that occur at different stages of the concert season. Using a Clegg Impact Tester I borrowed from a former tutor of mine, Dr Andy Owen of Myerscough College, the first opportunity I had to measure was following the remedial work after the George Michael concert. The pitch was split into sections - six points across the pitch by nine the length of it, giving us 54 points across the pitch in total.

For guidance, Clegg Hammer readings are put into the following categories according to guidelines from the Sports Turf Research Institute:
Preferred:55-140
Acceptable:35-200 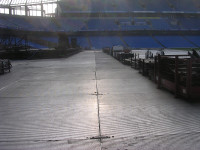 The higher the reading the greater the level of compaction

The first readings (see below) were taken on the 21st June 2007 starting from the main service tunnel in the north west corner. As you can see by the readings this is a very compacted area, reading 301 on the Clegg Hammer. The reading below it, of 206, is also in front of the tunnel and is significantly different to the low impact south end of the pitch that had no plant machinery and little foot traffic during the concert period. From the grass health point of view these areas on the south side are also the last to be covered and first to be uncovered.

The two readings were also not within the 'acceptable' level set by the guidelines.

Most of the other readings were working towards 200, with two more actually going over 200. The other two that were over 200 were in high impact areas where stillage is stored during the stage build and therefore sees a lot of fork lift activity.

As can be seen from the pictures, a lot of heavy equipment is put onto the surface via the service tunnel, hence the high readings in this area.
The readings averaged out to a Clegg impact value of 177, within the accepted range, but not that far from the top end of the scale nonetheless.

The second set of readings (see below) were taken on 22nd June, prior to the set up for the Rod Stewart concert scheduled for 28th June. As you can see there is a noticeable difference in readings, in the main due to the fact that we solid tined the pitch on the same day using 16mm tines at a pattern of 90mm depth x 100mm x 100mm spacings. The most notable difference being the north west corner where the reading went from the highest on the pitch to by far the lowest. 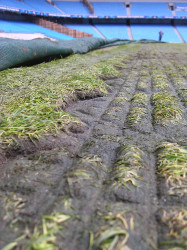 The readings averaged out to 134, much improved on the previous reading and now falling at the top end of the 'preferred' range to just short of the 140 maximum. They also give a good indication that even aerating to a depth of just under 100mm after all the heavyweight use from a concert can improve compaction levels considerably.

We took the third set of readings (see below) on 30th June, two days after the concert and straight after the pitch had been cleared completely of the flooring on the grass surface.

The readings weren't too bad, though the main access area in the corner did compact heavily once more. Possible reasons for the results being better than after George Michael could be:

The average reading this time was 149 - just outside the 'preferred' range, though not much worse than prior to the concert set up taking place. Strangely though, in some areas the compaction was less than before the concert!

The last set of readings were taken after the pitch was vertidrained to a depth of 125mm at 100mm spacings.

The results, post vertidraining, were a bit strange, some areas had improved considerably in the stage area at the north end, but some in the south end, which had seen little in the way of weight at all during the two concerts, had actually got worse. The fact that selected readings were not as good as the solid tining carried out with the Multicore previously indicates a link between the greater amount of holes made in the surface than the vertidrain, particularly when you look at the north west corner. The average reading for the pitch overall though is 129, which is actually the best of the four different readings taken over the last few weeks - work that one out!

Despite the excessive weight put on the pitch during periods of prolonged heavy rain, it is pleasing from our point of view that all the readings during this time remained in the 'acceptable' bracket of the guidelines set out by the STRI. As with all surfaces up and down the country, aeration will be carried out on a regular basis throughout the coming season to promote good drainage and better root growth. All we needed to worry about before our first game, was what type of surface they were going to be playing on! 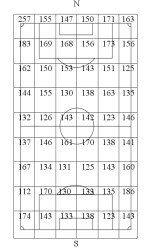