Cricket in South Wales has got off to a good start following deep, compressed air de-compaction treatment on two local authority outfields.

"Pre - season we'd had a wet spell and two of our four cricket pitches at Aberdare Sports Centre were holding water and out of action," recalls Martin Sullivan, Outdoor Parks and Amenities Officer for Rhondda Cynon Taff Council. "We'd identified the problem as compacted ground, and as we have limited resources we decided to tackle the problem using deep compressed air de-compaction treatment. We'd used Suffolk based Terrain Aeration earlier in the year to treat a football field with similar problems at Hendrefogan, which had immediately brought the pitch back into play with no more cancelled games." 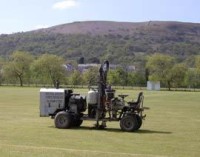 David Green, Terrain Aeration's M.D. used Airforce, the company's hydraulic terralift machine to treat 4,000 square metres, injecting compressed air one metre down at two metre spacings on the lower lying sections of two outfields, where the effects of standing water could be seen.

According to Julian Walker, Acting Area Parks Manager who has been working at the Municipal Recreation Ground since 1988, the site could be on an old refuse tip, and it certainly put up a high degree of resistance. Green found that in almost every instance the probe could only reach a depth of 500 mm before Airforce's JCB road breaker was required to force it downward the final 500 mm. "This concrete smashing hydraulic hammer is fitted as standard to all Airforce Aeration machines," he continues "and delivers 1,800 blows per minute to the probe, forcing it through almost any material."

Having reached the full working depth of one metre, Green released compressed air at a maximum 20 Bar pressure, to break up the hardened layer and create fractures and fissures bringing air into the subsoil. Dried milled seaweed was injected on the final air blast, which will swell on contact with moisture and keep the newly formed air channels open.

"The hardened layer proved to be clinker," Green remembers. "It has a high calcium content which weathers over the years and forms a concrete like, impervious material. It was essential to break up this aggregation to allow the drainage system to function correctly. Although the operation prompted substantial surface movement, there was no evident surface disruption immediately afterwards."

Following Terrain Aeration's departure on the Thursday, cricket matches were played all over the weekend, and the rain that was forecast never materialised. "Apart from some light drizzle we've been bone dry," reports Julian Walker. "We really need a good downpour to assess the effectiveness of the treatment." Martin Sullivan however has no doubts. He has already booked the company to aerate Ynysangharad Park, Pontypridd following Tom Jones' concert in his hometown.

For further information on the deep compressed air de-compaction treatment offered by Terrain Aeration, contact the company on Tel: 01449 673783 or visit their website at: www.terrainaeration.co.uk