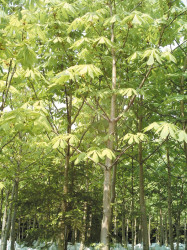 The Horse Chestnut is being attacked by pests and diseases. But how serious is the threat to one of our favourite, and most recognisable, trees?
JOHN SCRACE, Plant Pathologist, explains the symptoms, the causes and the remedies.

Whilst it is not a native tree, the Horse Chestnut (Aesculus hippocastanum) has been present in Britain for nearly four hundred years. Instantly recognisable from its leaves, flowers or conkers, it is much loved (particularly by children!) and has been used widely, both in urban street planting schemes and parks.

Until recently the tree has been free from serious pest and disease problems but, in the last two or three years, this has changed.
You may have read articles in the national press about a two-pronged attack on the trees, by a pest called the horse chestnut leaf miner and a disease known as bleeding canker. The threats to the tree described in these articles have ranged from widespread death of trees to a lack of conkers for the World Conker Championships! Is this more scare mongering by the press, or do these new problems really pose serious risks?
Horse Chestnut Leaf Miner

Those of you in the south-east (particularly in the Greater London area) may have wondered why, in July and August, certain horse chestnut trees looked as if autumn had arrived early. I was working at the Hampton Court Flower Show, during the first week of July, and was shocked to see that the leaves on many of the horse chestnuts in the surrounding area were already brown and starting to fall.

The reason for this was not drought (the really hot, dry weather was only just starting) but a severe attack by a moth called the horse chestnut leaf miner (Cameraria ohridella). The moth itself is very inconspicuous, just five millimetres in length and brown with white stripes. It does not feed directly on the trees; it is the larvae (caterpillars) that cause the damage.

Until 2002 the moth was unknown in the UK. It was first seen in the late 1970's in Northern Greece but did not start to cause problems until 1989 when it began to spread rapidly through central and Eastern Europe. It is now spreading west, and was first found in the UK in Wimbledon in July 2002 (it will never be known whether or not it arrived accidentally with someone's tennis kit!). 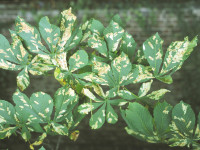 Whilst the most damaging attacks are still in the London area and the south-east, the moth has now been recorded as far away as south Wales and north Norfolk, and is likely to continue spreading rapidly. Whilst the moths can be carried for long distances on the wind, such rapid and widespread dispersal is thought to be due to either moths or infested leaves being transported accidentally by cars and other vehicles.

Adult moths lay eggs on the top of the leaf - up to 700 eggs have been found on a single leaf. The eggs hatch in 2-3 weeks, and the larvae feed by burrowing between the upper and lower leaf surfaces to produce a brown blotch. The individual blotches are sometimes bordered by the main veins of the leaf but, if numerous mines are present, they will merge together. Severely affected leaves will turn brown, curl and fall prematurely. If affected, leaves held up to the light will be translucent, and it may be possible to see the larva or pupa within them. Similar blotch symptoms may be caused by a fungal disease called Guignardia leaf blotch (see below).

The moth produces a number of generations during the year, and finally overwinters as pupae within the fallen leaves.

The potential damage that the moth may cause to horse chestnuts in the UK is still a matter for conjecture. The overwintering pupae are very frost-tolerant, so a hard British winter (now more of a rarity anyway) will not kill them. Our increasingly hot, dry summers are also ideal for the moth. In parts of Europe, where the moth has been a problem for a number of years, repeated early defoliation has not killed trees.

However, there is a worry that this may lead to a reduction in the vigour of the trees, making them more susceptible to other problems such as drought and attack by other pests and diseases (such as bleeding canker, described below). Even if this does not occur, the poor appearance of affected horse chestnuts may lead to a change in perception of their value as amenity trees.

Certain insecticides will have activity against the pest but widespread and routine use of these would be costly, time-consuming, in many cases impractical and certainly not environmentally friendly. There is a hope that natural enemies (such as parasitic wasps) may build up and reduce moth numbers, but this is only happening on a small scale at present.

As the pest overwinters in fallen leaves then burning, burying or composting will help, at least where affected trees are geographically isolated from other horse chestnuts. The common white horse chestnut, Aesculus hippocastanum, is very susceptible to attack, but other species vary in susceptibility and the red-flowered hybrid A. x carnea is highly resistant. 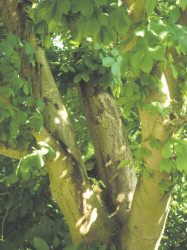 A disease called bleeding canker of horse chestnut has been known in the UK since the 1970's. At this time the cause was found to be a microscopic, fungus-like organism called Phytophthora. The disease was not particularly common, and confined to south-east England. In recent years, however, the number of cases of bleeding canker has increased rapidly, and the problem is now found throughout England, with cases also recorded in Wales and Scotland. There has been a similar dramatic increase in disease levels in Holland, France and Germany. In most of the 'new' cases it has not been possible to identify Phytophthora as the cause.
Symptoms

Affected trees have areas of dead bark, which produce a red, brown or blackish ooze. If this bark death results in the girdling of branches or trunks, then death of the limb or the entire tree can result. If the outer bark is removed from affected areas, the inner bark will often be found to have a mottled, orange-brown colour.

Weeping from the bark of trees can have other causes, such as severe drought or honey fungus attack but, in these cases, the affected area is usually close to ground level. Bleeding canker, by contrast, can be found at points from close to the ground to several metres up the tree.

Both white and red-flowered horse chestnuts have been affected by the recent upsurge in bleeding canker, and a survey carried out in Hampshire by the Forestry Commission found that the disease affected about half of the trees examined. Whilst mature horse chestnuts can be badly affected, the disease is most damaging to younger trees, as these have smaller trunks and branches which are more easily girdled by the cankers. Girdling of affected branches may take many years on mature specimens, but the trunks of smaller trees may be girdled in just 3-4 years.
The Cause

Phytophthora can still be found as the cause of some cases of the disease but, in more than ninety per cent of current cases, this organism is not associated with the problem. Instead, tests on the lesions affecting UK trees have resulted in consistent isolation of a bacterium. In Holland, tests on affected trees have also resulted in the isolation of a bacterium, a known plant pathogen called Pseudomonas syringae. In the UK, the Forestry Commission is attempting to confirm that the bacterium is the causal agent - they will need to inoculate it into healthy material and reproduce the symptoms in order to do this.

Recommendations are at present quite tentative due to the lack of knowledge about the disease. Removal of badly affected trees may help prevent spread of the problem. Lightly affected trees should be monitored closely, but removal is probably unnecessary unless there is a threat to public safety. It is possible that lightly affected trees could recover, although if only a small number of such trees are present in a large area of otherwise healthy horse chestnuts removal may still be prudent. When pruning or felling affected trees, start with those most lightly affected first, and disinfect tools thoroughly.

Destroy affected plant parts by burning or burying - do not leave them lying around, and avoid chipping them as this could spread the problem.
It would also be prudent not to replant with horse chestnut in an affected area, and to avoid planting young horse chestnuts in an area that is currently free from the disease (as there is a potential risk of introducing the disease on planting material).

This disease, caused by the fungus Guignardia aesculi, has been around for many years. It is not particularly damaging, as attacks do not usually occur until late summer or autumn, when the tree has completed most of its growth. It could, however, be mistaken for horse chestnut leaf miner.

Blotches caused by Guignardia are most often found at the edges of the leaf, and usually have a yellow margin. They are not translucent when held up to light and tiny black spore-producing structures may sometimes be seen if the blotch is examined with a hand lens. If in doubt, and if the tree is in an area where the leaf miner has not been recorded, it would be worth informing the Forestry Commission. For distribution maps of horse chestnut leaf miner, details on sampling, and further information on both this pest and bleeding canker disease, go to www.forestresearch.gov.uk and follow the horse chestnut link.
Conclusion

Whilst the symptoms produced by the horse chestnut leaf miner can be spectacular, there is currently no information to suggest that this pest will on its own cause serious long-term damage to horse chestnuts in the UK.

However, as well as the adverse affects on the aesthetic quality of the trees, there are some concerns that a reduction in vigour by repeated, heavy infestations may increase a tree's susceptibility to attack by other pests and diseases such as bleeding canker (particularly if trees are already stressed by environmental factors such as drought). Bleeding canker can certainly cause severe problems, but due to our current limited knowledge about the disease the prognosis at present is uncertain.

If horse chestnuts or other trees in your care are struggling or showing dieback symptoms it is always best to seek advice from a trained arboriculturalist, particularly where there could be any risk to the public from falling trees or branches.