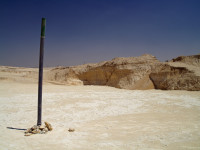 Tim Lobb, principal of Thomson Perrett & Lobb, the international golf course architecture practice founded by five times Open Champion Peter Thomson, has just returned from a site visit with Design Associate Andrew Goosen, and confirmed that staking has been completed and bulk construction on the golf course, on hills with views to the ancient Pyramids, has begun in earnest.

"With so many golf developments having been put on hold over the past year, it is a credit to the developers and everyone involved with New Giza that the project is moving forward," said Lobb.

"The site for the golf course is part of one of the most dramatic landscapes we have worked on, with incredible hilltop views to the Pyramids and 50-metre high cliffs, which have been incorporated into the golf course design."

Lobb added: "The news that there will be an MGM Grand Resort on site underlines New Giza's status as a landmark development for Egypt. It is a very exciting project to be involved with."

The community will be part of the 1,500-acre New Giza development which will also include a second hotel, a state of the art Hospital with 540 beds, a medical school, a university, two schools, a sporting club, two mixed use areas with restaurants, shopping malls and office spaces, plus 5,500 villas, townhouses, and apartments in ten individual neighbourhoods, surrounded by greenery, parks and lakes.

The golf course, which forms a central part of the development, will ride the desert hills, offering spectacular views, and incorporate bold natural features that will help create a unique golfing experience.

"We are fortunate to have such an outstanding piece of land to work with," continued Tim Lobb. "We are not actually having to move huge amounts of earth to create interest and excitement in this golf course, as the hills, ravines and cliffs are already there. What we are doing, through the design and construction, is bringing the drama of the landscape to life for golf, and we have no doubt that New Giza will be a landmark project for the region."

Pictured: The site of the 13th green, a dramatic par-3 played over a ravine from a tee on top of the cliffs. www.tpl.eu.com www.newgiza.com