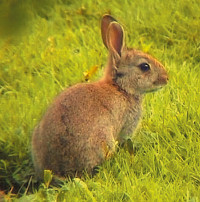 The total winter population is currently estimated to be at 35-40% of the premyxomatosis level and is increasing by about 2% annually.

Under Section One of the Pests Act 1954 England and Wales (except for the City of London, the Isles of Scilly and Skokholm sland) is a Rabbit Clearance Area. In this area, every occupier of land is responsible for destroying wild rabbits on his/her land or for taking steps to prevent them causing damage. This is a continuing obligation.

The most effective time for control is from November to March, there are four main reasons for this recommendation:

• Mortality from natural causes will have reduced rabbit numbers to their lowest level by the winter. Up to 90% of young rabbits born during the summer will have died by this time without intervention by man.

• Action at this time will reduce the adult breeding population before the next breeding season begins. Each female rabbit killed during this period can mean at least 20 fewer young rabbits born next summer.

• Reduction of numbers during this period will reduce damage to autumn sown crops.

• Vegetation is dying back, making access to burrows easier.Main methods of control:An occupier may use any legal method to kill rabbits and should ensure that he/she complies with other legislative controls on the methods of killing and taking animals, the most relevant of which are:

• Gassing - the most effective method of reducing rabbit numbers where burrows are accessible. The only commercially available fumigants are formulations that generate phosphine gas on contact with moisture. These are available either in tablet or pellet
form. Gassing should only be undertaken by persons trained in the use of aluminium phosphide.

• Fencing - when correctly erected and maintained, wire-netting and electric fences can reduce rabbit numbers on protected areas by 85-90%.

• Shooting - the Ground Game Act 1880 gives an occupier the right to shoot rabbits on his land during the day and to authorise in writing one other person to do so. Shooting at night with a spotlight is the most effective but, even so, is only likely to reduce rabbit numbers by about 30%.

• Baited cage trapping - this technique involves the live capture of wild rabbits in galvanised wire-mesh cages baited with carrot. The technique can be used throughout the year, but is most effective at catching adult rabbits
during the winter. Cage trapping has been shown to reduce numbers by about 65% • Spring trapping - only approved traps, designed to catch and kill rabbits humanely, may be used. To minimise the risk to non-target species, stock and pets should be excluded from the trapping area.

• Snaring - intended for use to tether rabbits for subsequent humane despatch. Where rabbits are numerous, the use of well-placed
snares can catch animals quickly and efficiently, but results are poor during dry weather and frost.

• Ferreting - most successful outside of the breeding season and has the advantage of capturing more females than males, However, the method is time consuming and, when used in isolation, is unlikely to produce effective control of rabbit infestations.

• Repellents - can be expensive, and does not always provide long-term protection from attack by rabbits.

More details on the control of rabbits, and other designated pests, can be found on the Department for Environment Food and Rural Affairs - www.defra.gov.uk