by External source
in Conservation & Ecology
on 11 Jul 2014

Declining numbers of starlings and tree sparrows in the Netherlands linked to chemical used to protect crops from insects.

Controversial pesticides blamed for the loss of bee colonies may also be having much wider environmental effects and damaging wild bird populations, research has shown.

Scientists in the Netherlands linked declines in farmland bird species, such as starlings and tree sparrows, with a neonicotinoid chemical used to protect crops from insect pests.

Nine of the bird species studied fed exclusively on insects, and all relied on insects to feed their young.

The findings, published in the journal Nature, suggest that the harmful environmental effects of neonicotinoids go far beyond their alleged impact on bees.

They echo the claims made in Rachel Carson's influential book Silent Spring, published in 1962, which led to a nationwide ban on the pesticide DDT in the US.

Silent Spring, which brought fears about the environmental hazards of indiscriminate pesticide use to the attention of the American public, focused mainly on the fate of birds.

The Dutch scientists showed that local bird populations were significantly lower in areas where there was more water contamination by the pesticide imidacloprid. 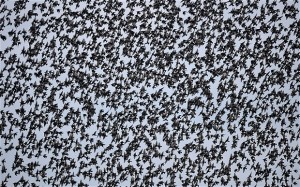 The authors of a new study, led by Dr Caspar Hallmann from Radboud University in Nijmegen, concluded in their paper: ''Our results on the decline of bird populations suggest that neonicotinoids pose an even greater risk than has been anticipated.

''Cascading trophic (food web) effects deserve more attention in research on the ecosystem effects of this class of insecticides and must be taken into account in future legislation.''