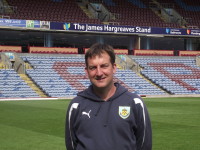 Involving 6 a side football with teams such as X Factor verses Big Brother, this prestigious event, previously hosted by Liverpool and Manchester United was televised on Sky Portal and an impressive coup for Burnley with their new Desso pitch.

Head Groundsman Paul Bradshaw, runner up in this year's Groundsman of the Year Awards for the npower Football League could have been less than pleased that his off season renovation time had been eaten into and the pitch, following a heavy season had come under TV scrutiny. Not so. "We'll just keep it going," he'd said with quiet confidence at the beginning of May. Following Soccer Six, Paul and his assistant have just 7 weeks to prepare the pitch before a pre-season friendly at the end of July.

"With the Desso pitch we can't just strip the top off with a KoroTopmaker which is what we've done previously," he explained "it's more complicated as we have to leave the fibre strands in place."

Built with last year's Premier League money and sporting under soil heating plus a new irrigation and drainage system, the £700,000 Desso Grassmaster Pitch has been constructed to equal that at Wembley and Arsenal, but along with a first rate playing surface comes higher usage.


This year it's hosted all nine home reserve matches plus 23 home games, various cup matches and over 20 training sessions," Paul confirms. "The new pitch is very free draining and quite hungry as it loses nutrients. We're feeding more, using a conventional 12.0.12 fertiliser in summer, 7.0.14 in autumn and 4.0.8 in winter. We're also checking for disease and using different types of fungicide to combat it."

One element of Paul's turf maintenance programme that hasn't changed is his use of both Amino-Sorb R (root) and Amino-Sorb F (foliar), organic stimulants supplied by Vitax Amenity. Having worked with Colin Turner, Vitax Area Manager for the past three years - Paul uses Vitax Supaturf line marking paint and line marking machines - he applies Amino-Sorb F roughly every three weeks from late March into summer according to weather conditions. "When we start using a growth regulator I tank mix it with Amino-Sorb F because, in addition to saving time I find that the product combats the discolouration that often follows a growth regulator application," he explains. "It seems to help the grass plant overcome the stress inflicted by the growth regulator and improve the sward's general health."

When Burnley's pitch has been stripped and re-seeded Paul will wait until the new grass reaches the second leaf stage before applying Amino-Sorb F to the new surface. Around October time he will change to Amino-Sorb R, to enhance root development, water and nutrient uptake, continuing his applications, as and when conditions dictate throughout the season.