0 Coping with dual sports at the Spotland Stadium 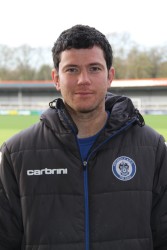 "Our most worrying time is at the end of the football season, when we have less than seven weeks until the next home fixture"
Phil Collinson, Head Groundsman, Rochdale FC

Like many a lower league football club, Rochdale have had a checkered history. Officially launched in 1907, their first ever Football League opposition came in the shape of Accrington Stanley on 27th August 1921, with the game finishing 6-3 in favour of Rochdale. During the twenties, the club flirted with promotion on a number of occasions, without success, and it wasn't until 1969 that they ventured up one division, under the management of Bob Stokoe, only to fall back in 1974. Indeed, it was only a couple of re-elections that saved them from dropping out of the Football League during the seventies, and they remain one of a handful of league sides that have never actually won any kind of trophy! However, they do have the distinction of playing in the final of the League Cup in 1962; the only bottom division team to have done so.

The Dale, as they are affectionately nicknamed, were thrown into turmoil in the eighties when Tommy Cannon - he of Cannon & Ball fame - was portrayed as the saviour of the club, only to appoint a new look board of directors that made a series of decisions deemed not to be in the club's best interests. Cannon eventually resigned in 1988 after an Extraordinary General Meeting was called by shareholders but, behind him, he left a whole string of debts.

After much financial wrangling, the previous board were reinstalled and embarked on a crusade to get the good ship Dale back to financial security. They were helped considerably by Rochdale Hornets Rugby League Football Club, who bought a 45% share in their Spotland ground for an investment of £400,000. The Hornets had

sold their Athletics Ground stadium to Morrisons supermarkets, and their move to the other side of the town ultimately saved the football club from extinction. Since the early 1980s, the Spotland Stadium has been home to both clubs.

The Dale finished the 2009-10 campaign in third place in League Two, winning promotion to League One, establishing themselves in the division the following season by finishing 9th.

Head Groundsman is Phil Collinson, who is assisted by Drew Duffy, a name that will be familiar to readers of the Pitchcare message board, for he was the first turfcare professional to benefit from our 'Find Me A Job' campaign. Indeed, it was Drew's honest appraisal of his then work situation that prompted the campaign.

The then seventeen-year-old Drew had been working as a volunteer at Rochdale, whilst completing his school studies and trying to earn a place at Myerscough College. Whilst Phil was delighted to have the help, and was mightily impressed with Drew's dedication and commitment, the club weren't 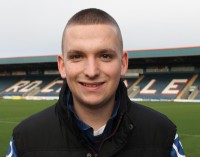 in a position to employ him full or even part-time.

Drew eloquently presented his frustrations and desire to work in the industry to the Pitchcare members via the message board and, eventually, through 'Find Me A Job', was offered a position at the Wigan Athletic training ground by their Head Groundsman, Ian Forshaw.

Drew was, understandably, delighted to get a foothold in the industry, but Phil soon realised what a valuable asset he had lost and set about persuading his club on the value of having an assistant. After agreeing the relevant funding, Drew was invited back to Rochdale as a 'paid' assistant. However, he remains eternally grateful to Wigan Athletic for giving him the initial opportunity.

Phil has been the Dale's head groundsman for nine years, initially inheriting a heavy soil based pitch, with limited drainage, that had changed little over the years. However, with the demands of dual use, often with back-to-back football and rugby, and just a five week germination window in May and June, Phil was struggling to maintain grass cover.

After the particularly bad winter of 2006-7, when eight matches were postponed due to poor drainage, the club, based on Phil's advice, agreed to install new primary

and secondary drainage systems. Souters Sports carried out the work, installing a primary system at five metre centres and a secondary, sand banding system at one metre centres. Further improvements were undertaken in 2009 when a Mansfield FibreSand pitch was installed. This also meant that a new, fully automated pop up watering system was required.

The combination of having a surface that can cope with high rainfall, and the equipment to get on and do a good job, has been the catalyst for producing a better pitch. Even so, coping with two different sports on the same pitch has it challenges. "It is a lot easier, going from football to rugby," explains Phil. "We've got it down to a fine art, greening out lines, changing posts and re-marking almost immediately after a game has finished."

"Our most worrying time is at the end of the football season, when we have less than seven weeks until the next home fixture. That's when we undertake our renovation work, and the weather plays a crucial role. Good weather, i.e. lots of sunshine and warm temperatures helps to stimulate fast germination and establishment, which can be crucial. Last year we employed the services of Bancroft Amenity to undertake the renovation work, which also saw the installation of some new sand bands, at half metre centres, to help reconnect to the existing primary/ secondary drainage system."

Work started on the 26th May. The pitch was fraise mown, removing all vegetation, and 300 tonnes of new sand and fibresand materials were integrated into the top 150mm. The pitch was then oversown with twenty bags of R14 perennial ryegrass and fed with a 6:9:6 granular fertiliser. Three weeks later, an 11:5:5 feed was applied. "The weather during the renovation period was quite wet and cold," remembers Phil, "and I was concerned that the grass was not responding very well, with some of the fertiliser being leached out by the rain. So, I applied another 12:9:6 feed, along with six additional bags of seed. This was followed up with a dose of 12:0:9 and some liquid iron. It did the trick."

"Initially, the new sward was mown with the Hayter rotaries. We then began firming up and increasing the cutting frequency using the new Dennis G860 and our old Ransomes Mastiff. Once the season gets underway, a seaweed solution is applied every four to six weeks."

"To give you some idea of what we have to contend with, our first match of this season was a Rugby League game on 3rd July, just five weeks after sowing. This was followed by another rugby match on the 10th July and then the first football friendly against Leeds United on the 19th July. It's a demanding schedule on new growth," admits Phil. "A lot of hard work is required to get the pitches up and running, and I was doing this all on my own at this time!"

Phil's skills were again tested in August when he had five games in just ten days; two back-to-back football matches, followed by one rugby, one football and, finally, another rugby match. "Having a fibresand pitch certainly helps; divot damage is greatly reduced compared to the soil based pitch. It is all about attention to detail. We get on when the weather is favourable, apply fertilisers, fungicides, water and wetting agents as and when the pitch needs it, whilst being thorough and precise when undertaking pre and post match maintenance regimes."

"One of my biggest bugbears during the playing season is the damage done by warms ups and warm downs," says Phil. "

With little or no spare space off the pitch, all of the warm up drills are carried out on the playing surface. Fast feet drills are the worst," bemoans Phil. "It's not so bad when coaches rotate the drills, but some teams are adamant about conducting repetitive drills in one spot. I try to 'educate' the coaches to understand the problem, so that they can at least try to help reduce the damage. Our lot are pretty good, but some visiting teams ...!"

Verticutting and regular brushing helps keep the pitch in good order. Mowing heights are kept between 28-30mm. Phil has a set of frost sheets to cover the pitch during icy conditions, using the heavier, thicker sheets in the shaded areas. "They have only been required a couple of times so far this season, in complete contrast to last winter."

Aeration is undertaken every three to four weeks using their Vertidrain 7316. "The operation takes up to five hours to complete the whole pitch," explains Phil, "and I generally combine it with a feed."

The club have recently acquired the use of a new training venue, moving to Manor Farm, a twenty-four acre site, with a view of securing a long term lease in the coming year. The site boasts four full size pitches and accommodation for players, together with full office, kitchen and rest and relaxation areas.

In the past, the club had ties with Rochdale Cricket Club, using two of their lacrosse pitches for training. "The Manor Farm site will give us greater control over the appearance and playability of our training pitches," says Phil, "and, in time, we hope to emulate the surface of the stadium pitch."

On a mild January day in Greater Manchester, Rochdale's pitch looks a picture, with little goalmouth wear and good grass coverage; a perfect scenario for the start of the new Rugby League season. That, of course, will test the skills of Phil and Drew but, judging by comments from visiting coaches from both sports, they have one of the best playing surfaces in the north-west.