Sixteen months on from the General Election, which saw David Cameron appointed as Prime Minister of a Conservative/Liberal Democrat coalition government, the future of many public services remains uncertain - not least for groundcare services. But, what does this mean for the groundcare industry as a whole? Both public and private sector organisations must consider the changes to the market over the past year and the developments that are shaping the future of the industry.

Last October, when Chancellor George Osborne unveiled the new Government's Comprehensive Spending Review, the reality of Britain's deficit reduction plan came into force. It was inevitable that councils would have to be ruthless in making urgent decisions on frontline service priorities, in order to survive departmental budget cuts averaging 19% in the four years to follow. 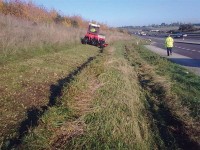 For Parks, Open Spaces and Horticultural Services, additional budgetary pressures came coupled with new legislative requirements and higher public expectations. Where groundcare is concerned there is no simple way of cutting costs: "When seeking cost reductions, crude cuts run the risk of damaging the underlying service, lowering the quality standards and, ultimately, damaging the visual environment and public perceptions," said a spokesperson from the Association for Public Service Excellence (APSE) earlier this year.

Simon Richard, UK Agent for the Reform and Shibaura tractor ranges, and also Muthing flails, agrees that decisions regarding groundcare services should not be made hastily, saying, "Undoubtedly, following the cuts, the favoured route for the majority of UK local authorities will be a combination of a reduction in staffing levels and number of cuts per annum. But pressures will come from within, through much smaller overall budgets and from the general public, who will continue to demand a reasonable level of open space maintenance in return for their taxes."

The impact that neglect of parks and green spaces has on communities has also been acknowledged in research, indicating that poorly kept public spaces can be linked to increased anti-social behaviour, crime and fear of crime, and that lack of access to green spaces results in poorer public health and well-being.

Experts have suggested that, for these departments, the impact of the spending review means more than just cutting costs, it means finding new ways of operating in order to add value to the services they are offering. 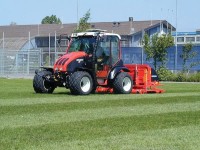 In response to the 2010 Budget, Lord Bichard, Director of the Institute for Government, said, "Those who run public services can do one of two things: carry on trying to run services as they do now and wait for the fallout from the budget, knowing that current flaws will only become more obvious and more entrenched. Alternatively, ask serious questions about how a service is functioning and radically rethink its design. It will take imagination and innovation, and it won't be pain-free, but doing it could help get even better services than before and cut waste."

Several private sector organisations are now working to make the transition to what has been coined an era of "citizen creativity" less painful by offering flexibility and collaboration.

Steven McInroy, Managing Director of SGM Contracts LLP, the UK's largest hirer of groundcare equipment, holds the view that partnerships between the public and private sector can be particularly effective for achieving performance improvement and best value in the delivery of groundcare services.

"The public sector has to be even more open-minded in talking to the private sector to see how efficiencies can be achieved," says Steven. "We are talking to a number of local authorities about various joint initiatives, for example. This could include SGM maintaining a client's own fleet, perhaps also utilising and managing existing workshop facilities they might have, as we are often able to achieve greater efficiencies through our processes and our buying power for spare parts." 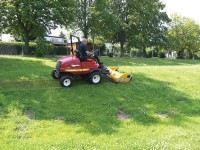 Such service delivery partnerships are becoming increasingly attractive to both local government and to suppliers in the groundcare industry. According to APSE, the local government body promoting excellence in public services, shared services "can be used to pool knowledge between organisations, whilst retaining local sovereignty."

Steven McInroy has seen, first-hand, the cost and efficiency savings that can be made with collaborative working: "Our partnering approach to groundcare fleet management has previously achieved savings of up to 35% of current equipment maintenance costs and reduced equipment downtime levels."

A recent paper published by APSE stated: "Greater machinery utilisation in a grounds maintenance unit can result in a reduction of the number of ride-on mowers/compact tractors; a potential saving of up to £100k." Indeed, SGM's partnering fleet management systems have led to a reduction in capital expenditure with its maintenance programmes, allowing customers to reduce their groundcare fleet sizes by up to 40% without any loss of operating capacity.

Partnering between public and private sector organisations can only be effective through increased flexibility and adaptation. Over the past year, SGM has proven the power of flexibility in a number of contracts with customers such as Stockport Metropolitan Borough Council, Northampton Borough Council and Rotherham Metropolitan Borough Council. The Stockport contract, which commenced in 2005, has evolved throughout the economic downturn and government changes. The company has been working in partnership with the council and its wholly owned subsidiary, Solutions SK, to manage the council's fleet of grass cutting machinery. 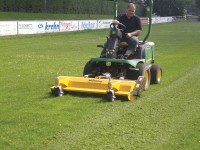 At the start of the contract, approximately 25% of the kit was still council owned and was to be maintained by SGM. This equipment would be replaced during the course of the contract as and when both parties agreed that it was uneconomical to repair but, whilst still on the fleet, needed to have accurate service records and be fit for purpose.

By 2009, machines owned by the council had fallen to a level of under 5% of the total fleet, with SGM employing three engineers and a business manager working from the same depot in Stockport, and with monthly meetings with the council to discuss current issues, new developments and any new products they felt could bring additional value to the contract.

As the end of the five year contract came into sight, SGM recognised that pressures surrounding local government, and particularly the forthcoming cuts in public spending, would play an essential part in Stockport MBC's decision to extend the contract. They, therefore, guaranteed further flexibility in all aspects of the contract, as well as offering efficiency savings in areas such as fleet numbers and utilisation, response times and machine downtime, and operator training and staff development.

These proposals were in line with Stockport MBC's and Solutions SK's visions for the future, resulting in a five year extension to the contract with SGM feeling confident enough to invest in excess of £150,000 this year to replace a key element of the fleet.

Partnerships between public and private sector organisations involve shared management and shared risk, and local government also has a liability to be open to change when entering a joint initiative. Simon Richard suggests that a large part of the solution to the problems now confronting them is for local authorities to reassess their whole machinery fleet in terms of value, performance and functionality, saying, "The skill for all concerned will be to arrive at the optimum level of capital expenditure that will deliver the best service possible for the taxpayer."

Simon goes on to make a more specific suggestion for adding value to groundcare services: "In my opinion, the ability of local authorities to achieve those two objectives of delivering quality of cut at less frequent intervals, will be greatly increased by taking the decision to increase the level of rotary and flail mowers as a percentage of their groundcare machinery stock."

The shift away from cylinder gangs and towards rotaries and flail mowers is just one example of a recent development, coming as a result of the spending cuts, that has had a major impact on both the public and private sectors for groundcare services.

Not only do rotaries and flail mowers generally cost less to purchase, they also cost less in maintenance. Added to this is the increasing tendency to cut less frequently. "A reduction in frequency of cuts per year, possibly in the order of fifty percent, will inevitably result in the need for grass to be cut when both longer and wet," says Simon. "Whilst the cylinder option will undoubtedly struggle to cope with such conditions, flails and rotaries are far more effective and efficient in longer wet grass conditions, as the discharge area reaches the full width of the machine. Perhaps the main claim of these machines is the ability to deliver very acceptable surfaces in all grass conditions, and at a fraction of the cost of the alternatives."

In addition to making changes to the machinery fleet and working practices, local authorities are also looking into different options for acquiring machinery. In particular, contract hire is becoming increasingly attractive to councils.

By hiring equipment, councils can eliminate the risks associated with purchasing such goods, removing assets from their balance sheet, thereby reducing the amount of depreciating assets. Hire contracts allow businesses and authorities to maintain the image of their fleet with a disciplined replacement programme, whilst benefitting from a fixed budget and the opportunity to release funds for more profitable use and to improve cash flow. Some hirers are now offering hire contracts with all maintenance and repairs built in, a more efficient option for councils looking to keep variable costs to a minimum.

Suppliers are also extending their product and service offerings to be able to cater better for the market.

Councils are now looking for more than the mere supply of machinery: they are increasingly outsourcing all aspects of fleet management, from maintenance to training to sourcing of spare parts. Groundcare suppliers are now required to shape their service delivery models around the needs of the users and the changing demands of the marketplace.

Looking at the various options available to local government for reducing costs, whilst improving parks and green spaces services, it would be wrong to assume that a solution to the spending cuts in this area has been found.

The harsh reality is that there is no single solution. The future of these services will depend very much on the extent to which councils have been innovative and adaptive and continue to be so. And, it is through partnerships with private sector organisations that these adaptations can be made as effectively as possible. There is, indeed, a certain level of comfort that can be sought from the notion of 'shared pain' that comes with joint initiatives.

SGM has proven the value of a partnering approach to groundcare fleet management in these trying times and, in doing so, has managed to secure numerous stable and mutually beneficial contracts. For example, the company has recently completed a £100,000 investment in Toro Fairway Mowers to meet the seasonal hire requirements of Glasgow City Council. Likewise, a £10,000 investment has been made towards further hand tools for Manchester City Council. Recognising the value of this collaborative approach, a number of councils have extended their contracts in the past year, including Tamworth MBC for which SGM has made a £50,000 investment in new replacement machines for the contract extension period.

Steven McInroy concludes: "Parks, Open Spaces and Horticultural Services are undoubtedly highly valuable in their contribution to health and leisure, the quality of the environment, the economy, social inclusion and combating climate change. Furthermore, suppliers of groundcare equipment, such as ourselves, depend on continued care for these areas to survive the economic downturn. Whilst the pressures on local government are in no way slackening, a partnering approach to groundcare fleet management can certainly soften the blow for the public sector, whilst also creating opportunities for suppliers and generating a more positive outlook for the industry as a whole."