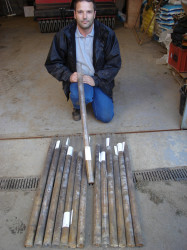 Core samples taken to a depth of one metre have given a Middlesex Head Groundsman a detailed structural profile of his widely differing, 36-acre site.

"We're situated in the Thames Wash," says Clive Liddiard, who has been Head Groundsman at Hampton Public School since 2002 and is in charge of no less than 14 winter sports pitches. "The sports ground is gravel based, but the depth of gravel in the soil profile changes dramatically across the site. It's all over the place." Wanting more detailed information on the structural differences beneath his pitches, Clive brought in Terrain Aeration to not only perform deep compressed-air de-compaction treatment, but also produce visual evidence of the soil make-up from the surface to one metre down. The company's MD David Green took fifteen core samples using his specially built machine, producing a series of one-metre depth, 50 mm diameter cores, each in a clear plastic tube that allowed close examination of the exact makeup of the soil in each area of the 36 acres of grounds.

"A "normal" pitch will have 10 to 12 inches of top soil before sand and gravel, but looking at the core samples one of ours has only six," Clive continues. "We're in the process of installing pop-up irrigation over the whole ground and I was going to do this particular pitch in two years time. Now that I know the soil structure I'm putting it in immediately." He also says that the clay level is different. "It almost shows the shape of the river before it shrank. One mile up the road it's pure clay, but here we've got some areas with no clay at all. One area has 12 inches of slightly silty subsoil and then gravel. It drains like a dream and drought could be a problem if we didn't have such a high water table."

Clive, who has been in grounds care for over 20 years has, since he arrived at Hampton been mainly concentrating on the root growth area, but says it's now time to look downwards. "When I took over the site was very anaemic and I'm looking at the core evidence to make sure that the soil is clean. I'm also checking on silt build-up. I started in greenkeeping and was lucky to be trained by one of the best greenkeepers there is, Jack McMillan," he continues. "Jack said that if you want the best surface you've got to know what's down there. I knew the basic structure but not the detail."

Clive has since transferred all the information from his core samples onto his computer, which has given him a detailed visual profile of the whole site. "Before, I didn't have this advantage," he says. "Cores taken to this depth are an important tool for Turf Professionals. After all, you wouldn't build a house without knowing what's underneath, would you?"

For further information on Terrain Aeration's one metre deep, core sampling service, contact the company on Tel: 01449 673783 or visit their website at: www.terrainaeration.co.uk